The public’s right to fish in Catskill navigable rivers

On several occasions, anglers have asked what I thought was the single most important issue facing the future of trout fishing in the Catskills. Without hesitation, I replied, “Continued and …

The public’s right to fish in Catskill navigable rivers

RR photo by Tony Bonavist
A section of the East Branch with accessible PFR.
Posted Wednesday, April 6, 2022 10:01 am

RAMBLINGS OF A CATSKILL FLY FISHER

On several occasions, anglers have asked what I thought was the single most important issue facing the future of trout fishing in the Catskills. Without hesitation, I replied, “Continued and improved fishermen’s access to the region’s rivers and streams.”

That may seem like an odd answer. But here’s what’s at stake regarding the public’s right to wade and fish in navigable Catskill rivers.

Perhaps the most confounding issues are those associated with the New York State Department of Environmental Conservation (DEC) public fishing rights program (PFRs). Some of you may recall that I wrote a piece about the problems we—friends of the East Branch— have encountered when trying to resolve access to certain PFRs due to posting, and the state’s failure to completely resolve that dilemma. (See, for example, riverreporter.com/stories/the-public-fishing-rights-dilemma-on-the-east-branch-of-the-delaware,19190.)

In addition to posting problems, there are significant issues associated with the public’s ability to access landlocked PFRs. When the then-New York State Conservation Department (now the DEC) purchased PFRs along most of the important Catskill trout rivers, almost all of those PFRs included a 33- or 66-foot easement along the river bank, which allowed anglers the right of access for the sole purpose of fishing.

While the state purchased footpath access to some PFRs, it did not purchase access to all. So when the PFRs are within 33 or 66 feet of the road, there should be no issues with access for fishing. However, when a river winds its way away from a road and the PFRs are further inland than the width of the easement, some landowners have posted against access to those easements. So the question remains in those situations, do anglers have the right to cross private property in order to access landlocked easements? Do landowners have an obligation to honor the commitment they made to allow fishing, if they have PFR on their property? Currently, the answer to those two questions is “No.”

This issue appears as a technicality exploited by some landowners: a loophole and conundrum. It shows bad faith on the part of those landowners that have PFRs on their property, yet deny access for fishing. A stark contrast, when compared to the landowners who have sold easements to the state, who welcome anglers, and who allow access across their land, even when DEC footpaths have not been provided. 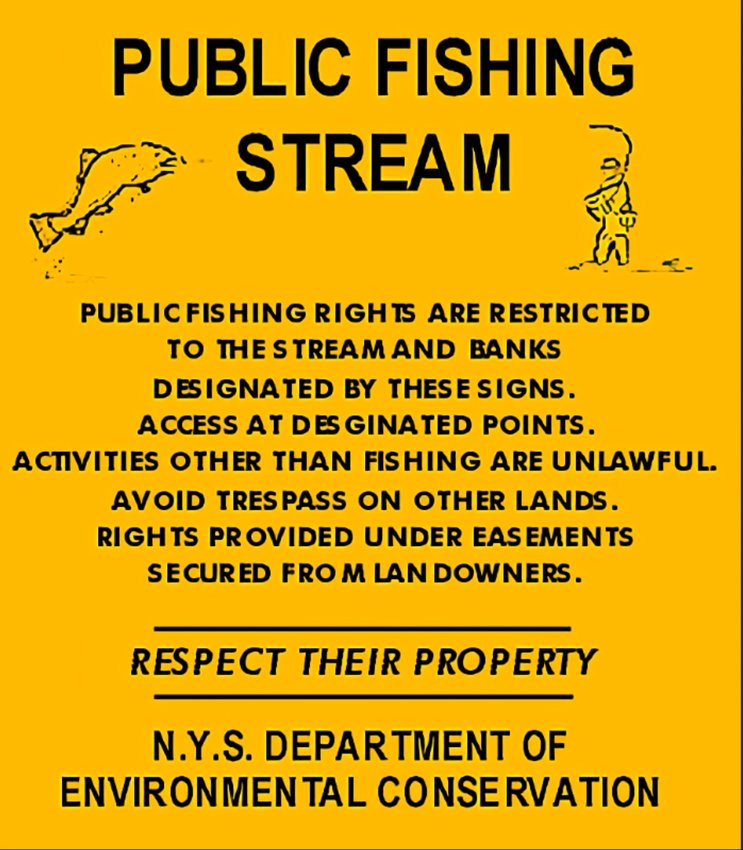 What’s very troubling is when the DEC has been notified that certain PFRs have been posted against access, and the agency has not entirely resolved the problem. There is a reach along the lower East Branch of the Delaware where at least one landowner has posted PFR against access. We found that in most of this section, the East Branch is within the PFR easement—It was measured—before finding its way inland. Because of the posting, access for fishing in this reach of river along the roadside had been denied. Despite several meetings and letters to DEC staff, some of that posting remains.

On the positive side, a recent field investigation found two PFR signs and fewer posted “No Trespassing” signs. Since the PFR in this section is over a mile long, the DEC needs to add a lot more signs, so anglers know the boundaries.

In addition to deceptive posting against access, there are other significant issues relating to PFRs and access along another section of the East Branch of the Delaware River. In February of 1962, the state purchased an easement and a four-foot right-of-way footpath for a fee of $300 from a landowner. That PFR has never been posted as publicly accessible, and the footpath not developed. We have sent several letters to the DEC about this particular issue. The responses we received were noncommittal and vague; nothing has changed.

Another significant problem facing anglers is their right to wade and fish in those sections of the river where the riverbank is in private ownership, but the river bottom may not be. We have researched several deeds relating to parcels along the East Branch, where the deeds state that the property boundary is “the low water mark.” We do not know what that term means with regard to who owns the river bottom and whether anglers may wade and fish in those areas. We assume that the term “low water mark” does not mean a landowner owns to the middle of a river. If we are correct, anglers should be able to wade and fish in the East Branch wherever deeds contain that language, provided that access to the river is not across posted, private property.

We have asked the DEC’s Office of General Counsel (OGC), for its interpretation of what the term “low water mark” means, so anglers may be advised accordingly. We await a response.

In the meantime, at least one landowner with that language in his deed has posted the East Branch against wading and fishing. In fact, this landowner, when challenged, filed a quitclaim deed with the Delaware County Clerk’s office, claiming he now owns to the middle of the river.

Until there is a clear definition of the term “low water mark,” the confusion about river bottom ownership and anglers’ right to wade and fish remains unresolved.

The state’s public trust doctrine is based on English common law, and has provisions within it that provide for access to navigable waters for a variety of commercial and recreational purposes, regardless of who owns the river bottom.

With respect to fishing, “The public has a right to fish on navigable waters that pass through privately-owned lands, unless title to fishing rights has passed to the landowner and no fishing easements exists; see section IIIB.”

That section, Public Right of Fishing, states, “The right to fish while navigating on navigable waterways depends on a variety of factors… the public’s right to fish on privately owned, non-tidal waterways necessitate a review of applicable land grants and deeds as well as a determination as to whether a prescriptive easement, exists.”

And then, in Part V: Procedure, “with these principles in mind, staff should follow this general guidance regarding persons navigating on or fishing in waterways. OPP officers are advised to issue tickets for trespass in situations involving persons exercising the public right of navigation only if there is clear evidence that the waterway is not navigable-in-law or navigable in fact.”

Since we know of no deed where fishing rights have passed to a new landowner, and unless our logic is completely flawed, the language in the summary and the procedure sections are confusing when compared with Section IIIB.

The question now remains, with all of this information in hand, where do New York State anglers stand, when it comes to their right to wade and fish in navigable rivers? As noted, there are issues with the Public Fishing Rights program that relate to posting against access.

We believe the posting problems can be resolved. Access to PFRs on lands that are outside of an easement, where access has been denied, may be open to interpretation by the state. It means that the DEC needs to make a determination based on the intent of the PFR program, and whether or not anglers may cross private property to fish regardless of the distance from the easement to the road.

Then there is the issue associated with who owns the river bottom, especially where deeds indicate the property boundary is “the low water mark.” It appears that a legal determination by the OGC regarding that terminology would go a long way toward solving this problem.

Finally, there is OGC-9, where there appears to be, as noted, confusion in the different sections regarding the public’s right to wade and fish in non-tidal navigable waters. Some of us think it would be most helpful for the OGC to review OGC-9, and reissue its findings as to whether or not anglers can fish in navigable rivers, regardless of who owns the river bottom.

Looking at all of these issues objectively, it appears that in some cases there are no easy answers. And it’s too bad that New York State did not have the foresight that the state of Montana did in 1985 when the legislature passed the Montana Stream Rights Access law. That law was challenged, but was held up by the courts. In essence the Montana Stream Right Access Law allows anglers the right to access rivers regardless of ownership for fishing, provided they do not cross private, inaccessible, posted land.

But here we are in New York State, with several difficult, unresolved access-related issues facing Catskill anglers. In addition to the problems already noted, more and more riverside properties will change hands, with many of those parcels posted against fishing. To top it off, state and local highway maintenance crews continue to place guard rails along roadways adjacent to Catskill rivers, adding to the access problem. As a result, access to the region’s navigable, high-quality trout rivers will become more difficult and limited, now and in the future.

Who let the dogs out?

Why a rusty spinner?