NARROWSBURG, NY — The corner of Kirks Road and Bridge Street guards the New York entrance to Narrowsburg, a first look for anyone who comes into town. This fall, that look will be entirely …

NARROWSBURG, NY — The corner of Kirks Road and Bridge Street guards the New York entrance to Narrowsburg, a first look for anyone who comes into town. This fall, that look will be entirely different than before.

The Narrowsburg Inn, a historic tavern and inn started in 1840, will open as a temaki pop-up restaurant. Temaki is a variant on sushi, where the ingredients are wrapped up in a hand-roll of seaweed.

Frederick Twomey, proprietor of the neighboring business Bar Veloce, has partnered with Karl Wasner and with sushi chef Jiro Yamata to bring temaki to Narrowsburg.

The delays Twomey faced in opening Bar Veloce led to the opportunity with the Narrowsburg Inn, he said. The market research he did showed that the Narrowsburg community was eager for temaki cuisine: “People light up like Christmas trees.” The bar will have a blend of Hawaian-tiki and California-surfer vibes, according to Twomey; the Gold Rush-era architecture of the Narrowsburg Inn reminded him of similar buildings he’d seen out West.

Twomey’s plans for the Narrowsburg Inn don’t stop with the temaki pop-up. He plans to reopen the rest of the building in stages, renting out the downstairs rooms as event spaces (and offering community karaoke nights) and renovating the guest rooms with high-quality basics.

“The real goal here with this space is to bring the community together,” says Twomey.

Travelers entering Narrowsburg will see the Narrowsburg Inn open for business starting in October, if all goes according to plan. They won’t see another Narrowsburg landmark: the Trump 2024 campaign headquarters sign that had been parked outside the inn for over a year.

The sign occupied a trailer at the corner of Kirks Road and Bridge Street. It claimed that the 2020 election had been stolen, and stated that no masks were required there. Ned Lang had placed the sign there; he owns the Narrowsburg Inn, and his son Jake Lang was arrested on numerous counts related to his participation in the January 6 insurrection.

Lang offered to take the sign away to make room for additional picnic tables outside the inn, said Twomey. It left on the evening of September 13.

Community chatter about the potential temaki restaurant at the inn had addressed the sign at length.

“At minimum, if that sign doesn’t come down I would never set food in the restaurant,” wrote one commenter on the Upper Delaware Community Network. 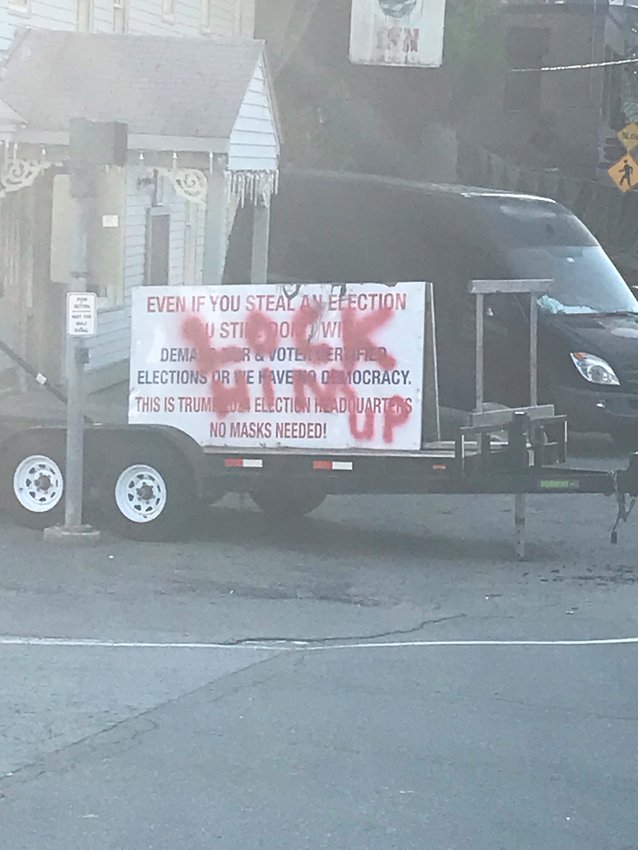 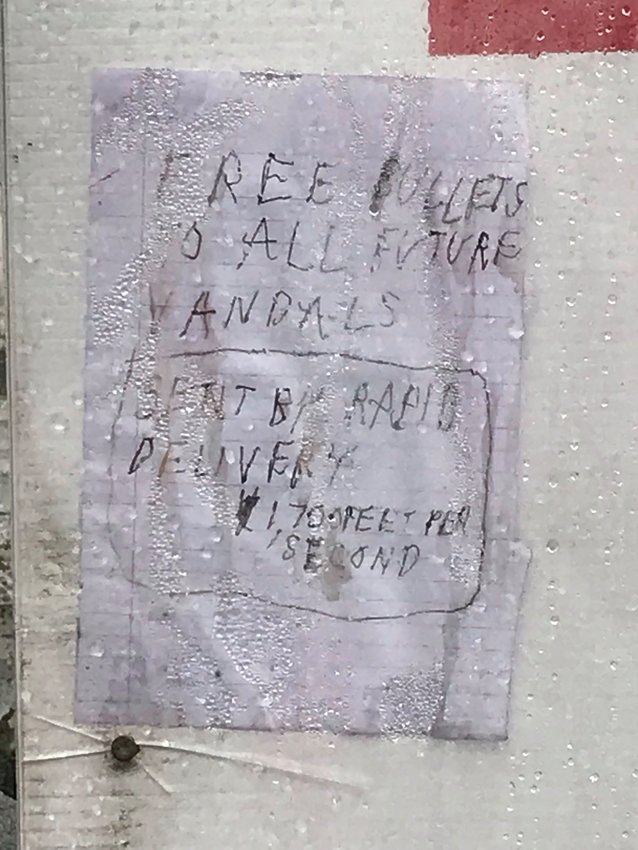 This message appeared slid under the plexiglass of the Narrowsburg Inn's Trump 2024 campaign headquarters sign in response to its vandalism; picture taken September 6.
Previous Next

“I feel that sign is just fuel to the fire for people who are violent and angry and it is normalizing a really scary point of view,” wrote another.

The sign had been vandalized in the weeks before it was removed, with red spray paint reading “Lock him up.” After the vandalism was removed, a handwritten message had appeared on sheets of paper attached to the sign: “Free bullets to all future vandals, sent by rapid delivery [at] 1700 feet per second.”

And what’s with Bar Veloce?

For a time, travelers coming into Narrowsburg will see the inn open but its neighbor Bar Veloce closed.

Twomey plans to open Narrowsburg’s Bar Veloce location later in the fall. A Manhattan location of the wine-and-cheese franchise is opening soon, and Twomey’s focus is on that for now, he said.

The opening checklist will include asking the Tusten Planning Board for approval of Bar Veloce’s rooftop addition; Twomey plans to start that process in October. The building’s rooftop deck had first appeared during the pandemic, as eateries required outdoor seating to function. While plans for a rooftop deck were not reviewed or approved by the planning board, Twomey said he talked to the chair of the planning board and the building department when making that construction.

The status of the legal case involving Bar Veloce remains unclear. Twomey sued the town and neighboring business owners Kathy and Brendan Weiden to stop a review of Bar Veloce’s alleged permit irregularities by the Tusten Zoning Board of Appeals; Sullivan County judge Mark Meddaugh ruled in his favor. Legal documents dated August 18 could indicate that the Weidens have appealed the decision; they did not respond to a request for clarification.

Eagles and doves in Narrowsburg

News from the Tusten Town Board

Blinding by the light on Bridge Street