HIGHLAND, NY — The Town of Highland released a redacted report on its investigation into its constable force. The report includes a substantiated allegation of sexually harassing statements …

ELDRED, NY — The Town of Highland constables remain suspended, as they have been since an April 12 town board meeting. Recent releases and statements from the town shed some light on why.

The town released on July 18  a redacted report from its constable committee dated May 31. The River Reporter made a Freedom of Information Law request in June for misconduct complaints against the town's constabulary force, as well as any investigative reports into that misconduct; the town provided the same redacted report in response to that request.

The report itself was not subject to FOIL, the reply stated, but the town board had authorized its release. The misconduct complaints were not subject to FOIL because they were dated prior to a change in disclosure law on June 12, 2020, were unsubstantiated, contained medical information, or pertained to technical infractions. 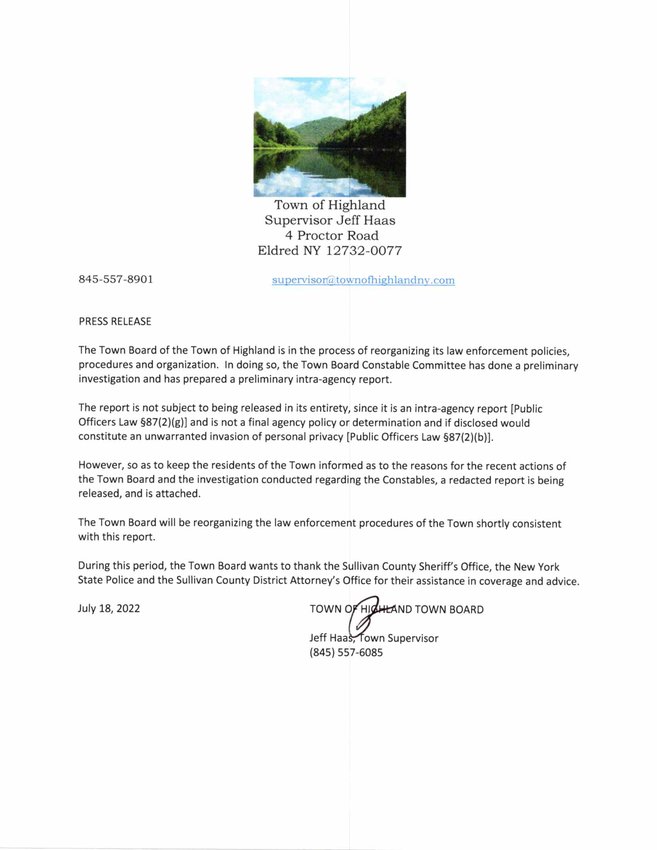 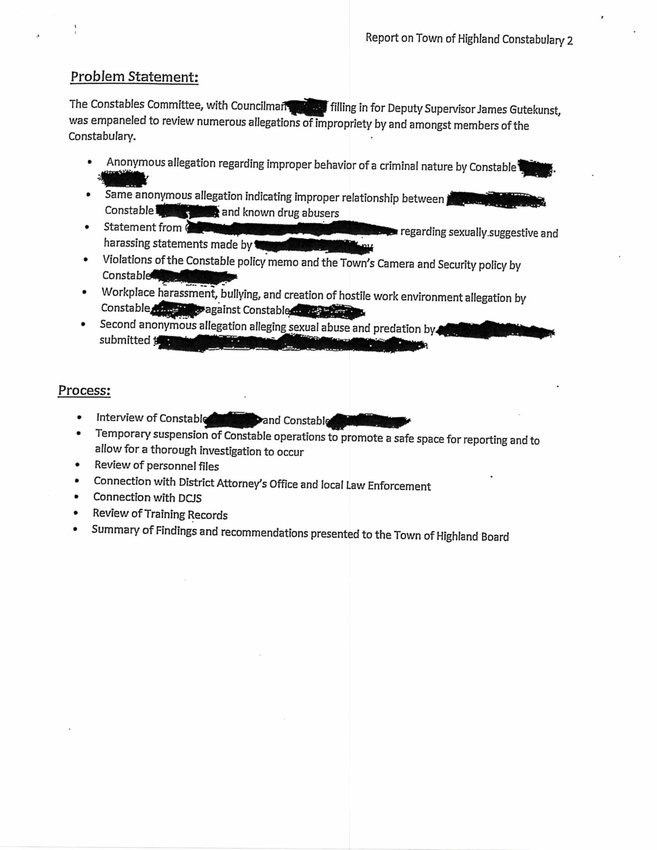 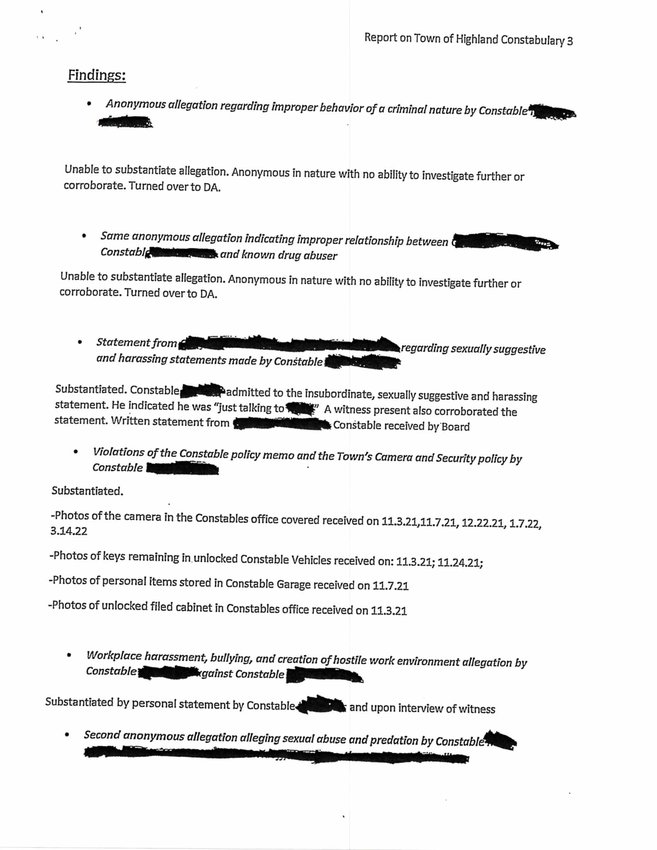 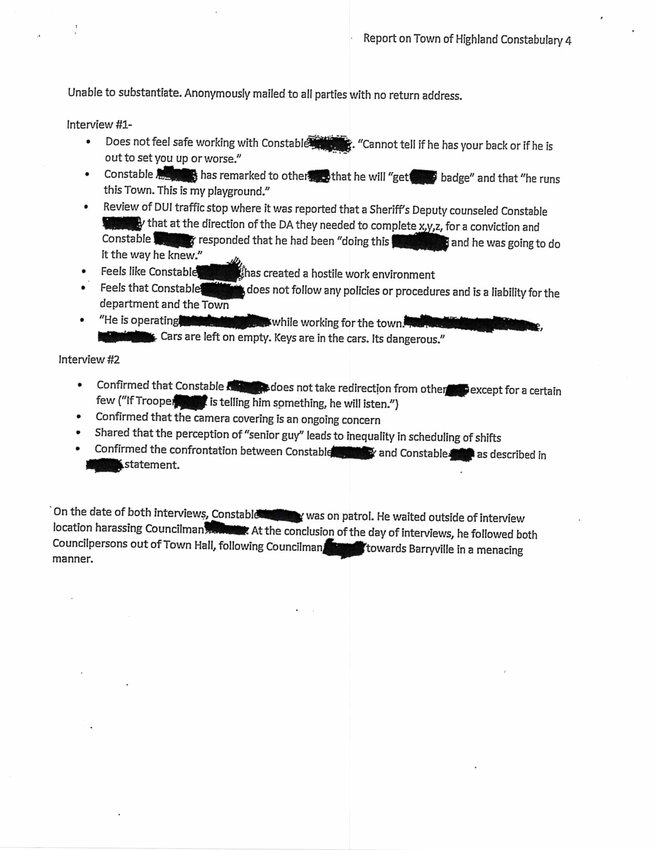 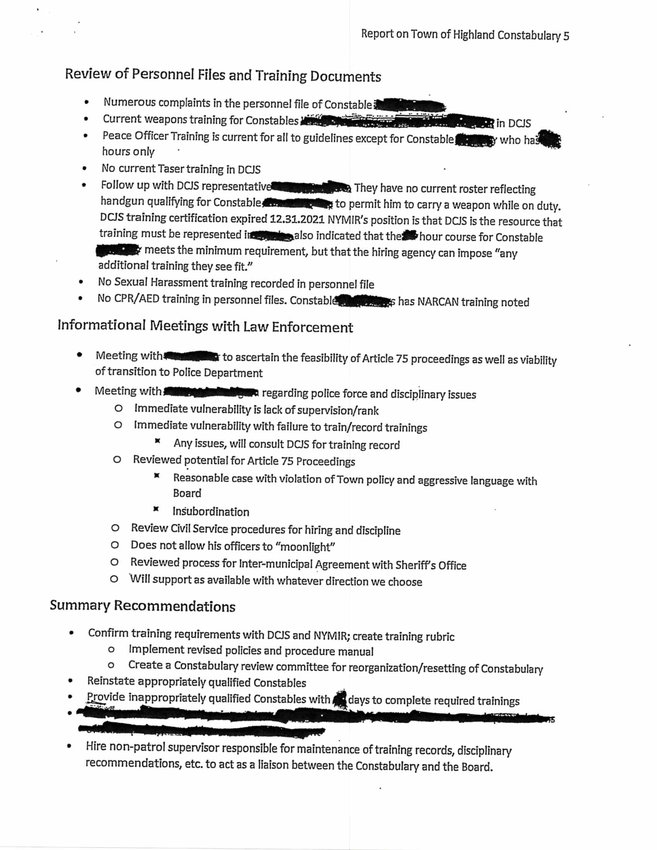 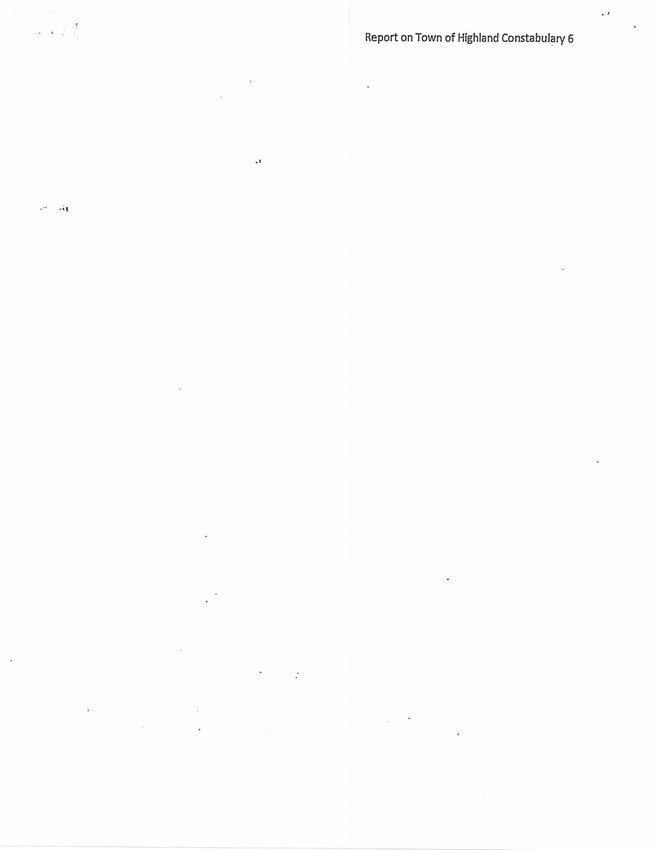 A source alleged sexually suggestive and harassing statements made by a constable. The constable involved admitted to the allegation, according to the report, saying that he was "just talking to." A witness present further substantiated the allegation.

The investigation also substantiated violations of the town's policies. According to the report, the camera in the constables' office had been covered on multiple occasions; keys were left in unlocked constable vehicles; personal items had been stored in the constable garage; and the constable file cabinet had been left unlocked.

The report also substantiated an allegation of workplace harassment, bullying and the creation of a hostile work environment, created by one constable against another.

The constabulary committee interviewed a pair of constables as part of its investigation. One said he did not feel safe working with the unnamed constable—"Cannot tell if he has your back or if he is out to set you up or worse"—and testified that the unnamed constable did not follow policies and was a liability to the department and the town. The other constable stated that the camera-covering was ongoing, and "shared that the perception of "senior guy" leads to inequality in scheduling of shifts."

According to the report, the unnamed constable on patrol the day of the interviews harassed the councilpeople conducting them, waiting outside the interview location and following a council man as he left.

The report also found insufficient training recorded in the constables' personnel files. That included no CPR/AED training; no sexual harassment training in a personel file; no current taser training; and a lack of handgun qualifications for one constable, barring him from carrying a weapon on duty.

The report concluded with a summary of options for the future, both from an informational meeting with law enforcement sources and from the constable committee.

The committee asked its law enforcement sources about the feasibility of an Article 75 proceeding, which allows for the firing of municipal employees and other disciplinary actions.

A law enforcement source told the board there was a reasonable case for Article 75 proceedings, based on violations of town policy, aggressive language with the board and insubordination. The report did not indicate what punishment would be sought.

The same law enforcement source is cited as stating that he "does not allow his officers to "moonlight". The source also reviewed the process for an inter-municipal agreement with the sheriff's office and promised support as available.

The sheriff's office has been providing assistance to the Town of Highland during the suspension of the constables. Sheriff Mike Schiff stated at a June 14 board meeting that his department would "assist in any way that they can and try to help whenever they could with whatever they got."

The constable committee made a few recommendations of its own, largely focused on re-establishing the constabulary on better footing.

One recommendation was redacted in its entirety.

According to councilmember Kaitlin Haas, who serves on the constable committee and conducted many hours of interviews, there is no specific timeline for the recommendations to be implemented. Additionally, the report recommends the hiring of a consultant who would be tasked with revising the policies and procedures, and determining appropriate constable training. “In the immediacy, we will be breaking off the court officers as a separate unit,” she said.