Making a case for community investment

At its root, philanthropy means the love of humanity.

Making a case for community investment

At its root, philanthropy means the love of humanity.

Philanthropy is the way we share resources and how we show our love for others. Philanthropy is written into our genomes; it has been a part of history since people first walked on Earth.

And organized or systems philanthropy? That takes it to the next level.

When you create an institutional way to give easily, to share what you can spare, you can change everything.

A county. A society. You can heal so much more.

In Wayne County, that organized—or systems—philanthropy is in the care of the Wayne County Community Foundation.

What is a community foundation?

Instead of just having money sitting in individual checking accounts, community foundations invest those dollars, lumped into one sum, so that better returns are achieved.

“It’s really a ‘go it together and you get further,’ rather than a ‘go it alone and it takes longer to reach that end point,’” Ryanne Jennings, President and CEO of the Wayne County Community Foundation, said.

The Wayne County Community Foundation was established nearly 31 years ago by five community members who had seen foundations pop up across the country and thought “Why not? Why not here?”

Community foundations had been around for about 100 years. The Scranton Area Foundation had been functioning for decades. The founders saw what was going on in other areas and thought, “Wow, we need to have something like that in our community, so that people can leave their legacy and make a difference for years to come.”

So a group of volunteer board members began to establish a Wayne County foundation. They pooled their own resources, and cajoled friends, family, connections and community members to establish primarily donor-advised funds, as well as general bequests that could support the organization.

“Some of the root needs are historic. Some are newer. Like broadband. Connectivity online has become essential for healthcare, for the workforce, for education and for businesses. Farms and other small businesses need broadband connectivity to be able to support their commerce.

So that’s constantly a moving target and trying to prioritize which needs and gaps need to be addressed first. But we have a really wonderful community and network of people predominantly supported by Wayne Tomorrow!.”

Paul Edwards was the first executive director in 2006. He began his work with The Foundation after his retirement—he was the superintendent at the Wayne Highlands School District. For 13 years, Edwards helped The Foundation develop a larger network of supporters and donors, and created grant-making policies and procedures that tightened up the organization as a whole. He developed a web presence and expanded the scholarships that were offered.

When Ryanne Jennings took over as executive director in 2019, community foundations across the country were going through an evolution. Instead of simply being grant-makers and scholarship administrators, the organizations began to play a role as convener around conversations that have large social impacts, tackling root causes of community challenges.

“Grants and scholarships can sometimes act as a Band-Aid on systemic problems. But if we are all pulling together our resources, our minds, our boards—everything and everyone together—we might be able to actually solve some root causes of social problems,” Jennings said. 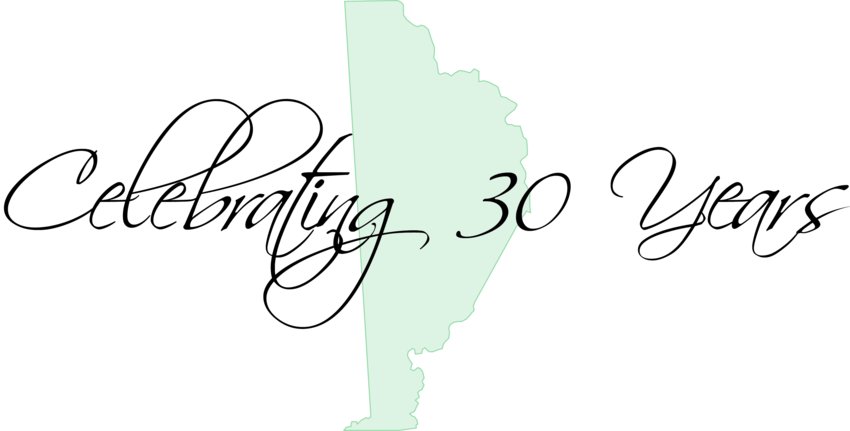 The economy is made up of three sectors:  government; private entities, private businesses and commerce; and nonprofits.

Each of these sectors needs the others to be able to function. In one sense, philanthropy has often played the supporting role of the other two, filling the gaps that sometimes arose in the business or governmental sectors and services.

Community foundations have the welfare of the entire community embedded in their mission.

So it is no surprise that community foundations can bring all three of those economic sectors together.

“Community foundations have the unique ability to fill gaps that might come in funding for governmental services and to make sure that the nonprofits have the services and dollars to fulfill their mission in the community,” Jennings said.

“In our community, we have some problems that many groups are working together to solve. Things like housing.... People need a safe place to live that is affordable. They have to have access to services in order to function well in society. These include education, transportation, and access to community spaces so that have a sense of belonging and inclusion in the community.”

The Foundation also serves as a resource for nonprofits to strategize how to fund large projects. While it might not be possible for The Foundation to fund an entire project, it can assist in helping to figure out a patchwork of funding from a variety of different sources. “We’re working to make sure that we’re connecting nonprofits with other funders in the community and region, so that if we’re not able to fund something in its entirety or at all, we’re able to still support that nonprofit in reaching their goal,” Jennings said.

There are many ways to establish funds and partner with the Wayne County Community Foundation.

An individual can establish a donor-advised fund with a donation. Those donations are entirety tax deductible, and the money is owned by The Foundation. However, the donor can advise on which 501(c)(3) organizations to support.

“Someone can establish a fund, say with $100,000, and they can issue grants out of that fund to their favorite nonprofit or, for example, their church. The donor can choose different causes, locally or nationally, as long as is a registered 501(c)(3),” Jennings said.

Nonprofits can establish their own donor-advised funds. In one sense, these organizational endowment funds are a stepped-up rainy-day fund for a nonprofit. Instead of that money sitting in a CD, checking account or savings account, it is being pooled to accrue interest over time from The Foundation’s investments. The fund is no longer owned by the nonprofit; however, the money is earmarked to go back into the nonprofit in the form of grants over time.

The Foundation also maintains pass-through funds. The pass-through funds help smaller groups that are doing seasonal or one-time events, so they don’t have to create their own 501(c)(3) organization to accomplish their goals. The Foundation acts as the fiscal sponsor for smaller groups or for temporary or seasonal groups spearheading special events or capital projects. In short, these are projects that are typically short-term or occur once a year.

Those dollars are not invested; The Foundation acts as the 501(c)(3) fiscal agency. This includes events like the BK Hope Cures out of  Woodloch. They have a pass-through fund that can raise those dollars.

“We think of our funds similar to the way you would think of a retirement account, in that we’re operating consistently with the mindset of ‘We’re close to retirement and we want to cushion those dollars and keep them for longevity,’” Jennings said. “Our attitude toward endowment funds is not aggressively entering the market. We’re approaching it like ‘you’re nearing retirement and we want to just have low and slow growth over time.’

“We try to make sure that we’re growing our funds for as long as we can so that we can give them back to the community. That’s the whole point of that, so the dollars are a passive income that work hard for the nonprofits that they’re serving.” 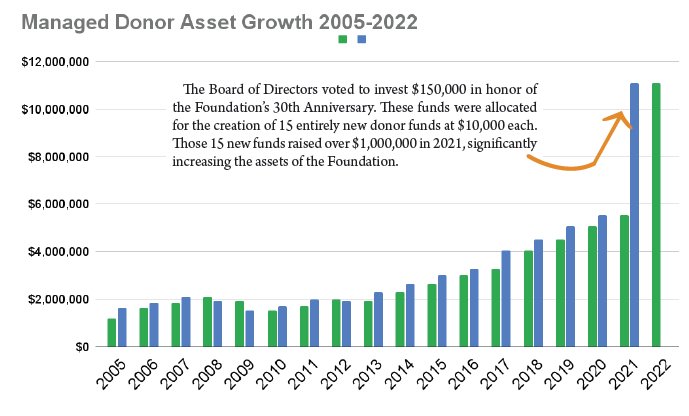 The Foundation is intentional about how it invests its money. The Foundation makes sure that each decision made is well thought out and and the greater good is always at the focus of that intention.

With that in mind, diversification is key to investment, which are split between five institutions: Wayne Bank, Morgan Stanley, Honesdale National Bank, The Dime Bank and Charles Schwab. Cornerstone, of Bethlehem, PA, acts as The Foundation’s chief investment officer. Within The Foundation, a finance and investment committee meets quarterly and reviews the portfolio with each of the institutions that hold a portion of The Foundation’s investment. The funds invested with Charles Schwab are in a socially responsible portfolio, which was established recently on the request of a few donor groups. “It came about because we had some groups that were interested in having endowment funds with us, but wanted to make sure that their dollars were not going into things like fossil fuels and we didn’t have a way to screen for that,” Jennings said. “Our staff and our board really try to be very intentional about the decisions that we’re making because we understand that money has impact and it can have  positive or negative effect in the community.”

“Our mission here at The Foundation is to preserve and enhance the quality of life of all people in Wayne County, and that mission comes out of my mouth daily, sometimes multiple times a day. It’s a reminder that we’re we’re talking about is preserving what we already have that’s good and great in in our community.

And then, it bring us full circle: how that can be enhanced, both for those living, and for future generations.”

The fundamental question for donors:

"What is your interest and what do you want to support?

What pulls at your heartstrings?

Is it animal welfare? Is it domestic violence? Is it food relief?"

“I think some nonprofits assume that a donor or a foundation wants just their name on the building or the plaque as the only people that supported that project. But generally speaking, foundations and donors want to see a lot of different people working to make the same goal happen. Foundations really want more people to have skin in the game to make that project possible. So for instance, the water trailhead at Industrial Point, Hawley, and White Mills were funded through DCNR (Pennsylvania Department of Conservation and Natural Resources) and the PA Fish and Boat Commission, as well as thousands of dollars in individual donations and multiple other private foundations that helped make that possible. It’s rarely one philanthropist that gives multiple billions of dollars to make a project happen. It’s often donations of $5, $10, $100. There are donations from every range and all of it matters. It matters, because that one person that gave $10 might have told a friend that gave $100 who told her friend who gave $1,000. It all compounds to make it possible.”

Creating Harmony in the Woods

Six ways that community foundations improve the quality of life