The Lenape Nation of PA takes to the river again

DELAWARE RIVER — Four years have passed, and on Saturday, July 30, members of the Rising Nation River Journey will begin following the great river that was once Lenape territory.

The Lenape Nation of PA takes to the river again

Photo by Dave Soete
Representatives from the Lenape Nation of Pennsylvania and from other groups journey down the Delaware from Hancock, NY to Cape May, NJ.
Posted Tuesday, July 12, 2022 1:01 pm

The wonders of the Delaware
By ANNEMARIE SCHUETZ

DELAWARE RIVER — Four years have passed, and on Saturday, July 30, members of the Rising Nation River Journey will begin following the great river that was once Lenape territory.

It’s become a tradition. Representatives from the Lenape Nation of Pennsylvania and from other groups journey down the Delaware from Hancock, NY to Cape May, NJ.

This is symbolic for people whose land was taken from them, but it isn’t just about remembering loss. It’s about building connections and the preservation of what remains.

This year, the journey takes place from July 30 to Saturday, August 20.

Who are the Lenape?

They are the Indigenous people of this region, and their territory spanned the Delaware River area, the state of Delaware, New Jersey and southern New York. They hunted and farmed, spoke an Algonquian language and were divided into three subgroups, according to the West Philadelphia Collaborative History website. (The territory of the Munsee subgroup included northern PA.)

“Indigenous people of this area had a very good relationship with William Penn,” said Adam Waterbear DePaul, tribal council member and story keeper for the Lenape Nation of Pennsylvania.

That changed with Penn’s sons and the Walking Purchase of 1737, when the sons swindled 1.2 million acres of Lenape homeland from its people.

“Our people were taken as slaves,” DePaul said.

Ultimately, the tribe split into two: a diaspora, “scattered in every direction,” and those who stayed. “The largest group went to Oklahoma and Wisconsin and into Canada.”

For the others, “we remained here by hiding,” he said. They intermarried with white people. They lost their traditional clothing, their ceremonies and nearly their language. Children recognized as Indigenous could be sent to boarding schools similar to the one in Carlisle, PA, their culture scrubbed away. (There are 186 graves on the site of that school, children who died while there.)

The Lenape Nation is raising money to offset costs of the expedition—food, campsites and sundry costs. For more information about the Rising Nation River Journey and to donate to the cause, visit https://www.lenape-nation.org/1st-project.

For a full—and evolving—itinerary, visit https://www.lenape-nation.org/1st-project and click on 2022 Itinerary.

The Lenape Nation still has a presence in Pennsylvania, New Jersey and Delaware, DePaul said.

Who are they now?

The Lenape Nation of PA is focused on “revitalizing our culture, the traditional ceremonies, traditional ways of governing, and preserving the language,” DePaul said.

History needs to be revisited; what was recorded was written by white men.

The nation in the 21st century is focused on stewardship, on the care of the homeland that was taken from them, he said.

Which led to the Rising Nation River Journey.

It started with signing a treaty of rekindled brotherhood. The treaty acknowledges that the Lenape are the Indigenous people of the area and that those who live here will remember and will bear responsibility for caring for the land.

“We signed with several wonderful partners, who would abide by it,” like the Audubon Society, watershed organizations and people focused on the environment.

“We paddled down the Delaware River, signing with different people” along the way. 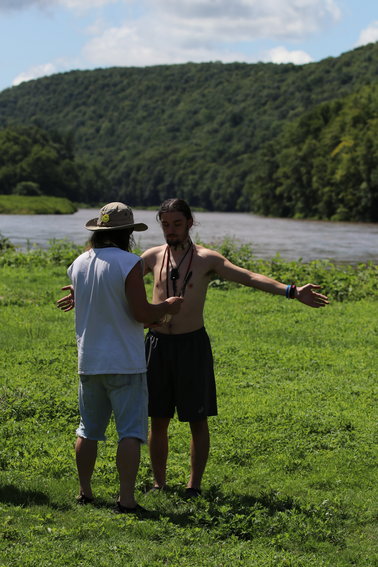 Participants make ready for their journey by participating in a blessing ceremony.

But it didn’t stop there. “It led to so many wonderful collaborations,” DePaul said.

The journey has been repeated every four years.

“All are welcome,” he said. “People can paddle all the way if they want.”

The call to remember

“We are still here, are still working to care for the Lenape homeland,” DePaul said.

But this time, the tribe is not alone.

The Big Eddy Film Festival is back in town

When writers and readers talk