What’s in a name?

The Delaware Valley Arts Alliance (DVAA) is about halfway through its 2022 Salon Series this year, and since there’s a nice variety of programming, offered both in person and online, I pondered …

What’s in a name?

RR photos by Jonathan Charles Fox
“It’s an old family name,” proud papa Jim Stratton told me after the show, and Mama Cass filled in the blanks for me afterwards. “Jim’s mother's name was Mavis Callison,” she explained. “There were no more boys in that family, so the name faded. Her full name is Callison Maeve Stratton." Callison's new (he's a carpenter!) husband Conrad Dean stands beaming behind Calla Sun in this family portrait, shot after the show at the DVAA.
Posted Thursday, March 10, 2022 1:05 pm

What’s love got to do with it?
By JONATHAN CHARLES FOX

The Delaware Valley Arts Alliance (DVAA) is about halfway through its 2022 Salon Series this year, and since there’s a nice variety of programming, offered both in person and online, I pondered which to take in, before reading that singer/songwriter Calla Sun would be performing in Narrowsburg, NY on March 5. She would present a “program which celebrates Women’s History Month.”

“Not exactly my cup of tea,” I groaned in the general direction of the dog, inferring from the info provided that that Calla Sun was a singer “who takes her inspiration from the American folk tradition, a blend of harmonic poetry and personal storytelling.”

The website also informed me that Sun’s program would be “featuring a slate of songs written by great women ranging from Billie Holiday to Dolly Parton,” as well as a selection of Calla’s (is that her first name?) own original music, “inspired heavily by the works of the female musicians who have come before her.” 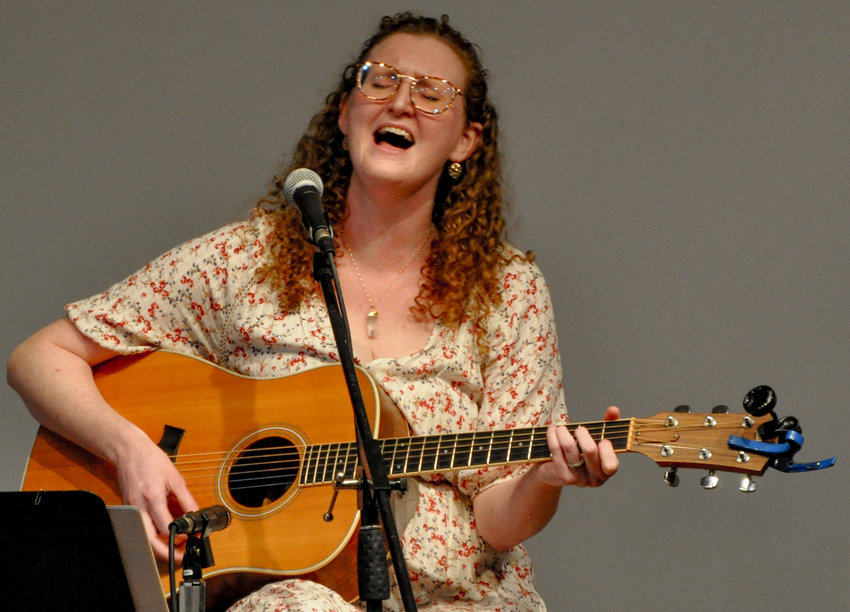 Calla Sun is a singer “who takes her inspiration from the American folk tradition, a blend of harmonic poetry and personal storytelling.” 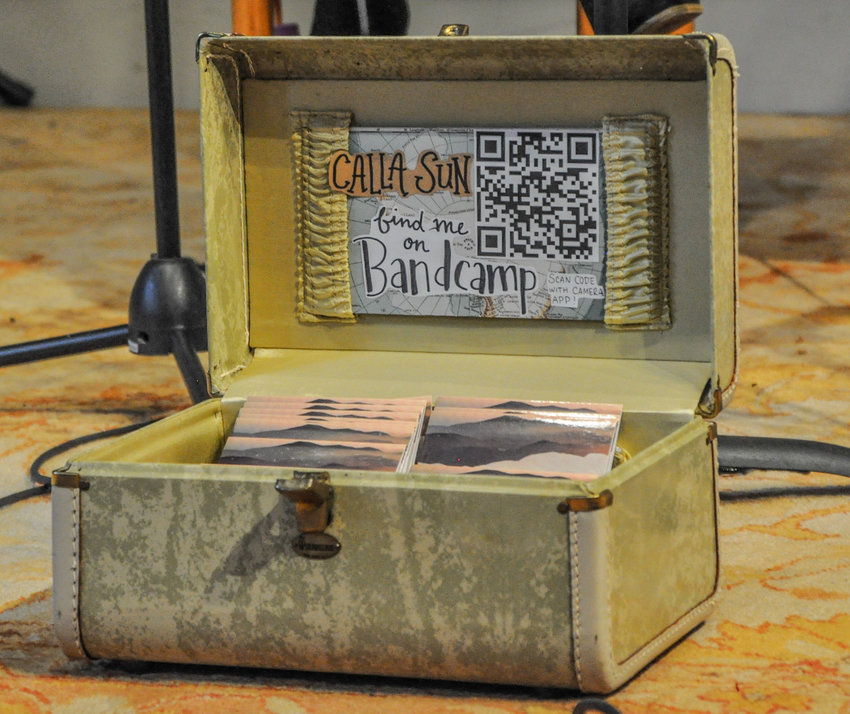 “I don’t think I know what Bandcamp is,” I said in an aside to Callison Stratton's mother, River Reporter columnist Cass Collins, who admitted … 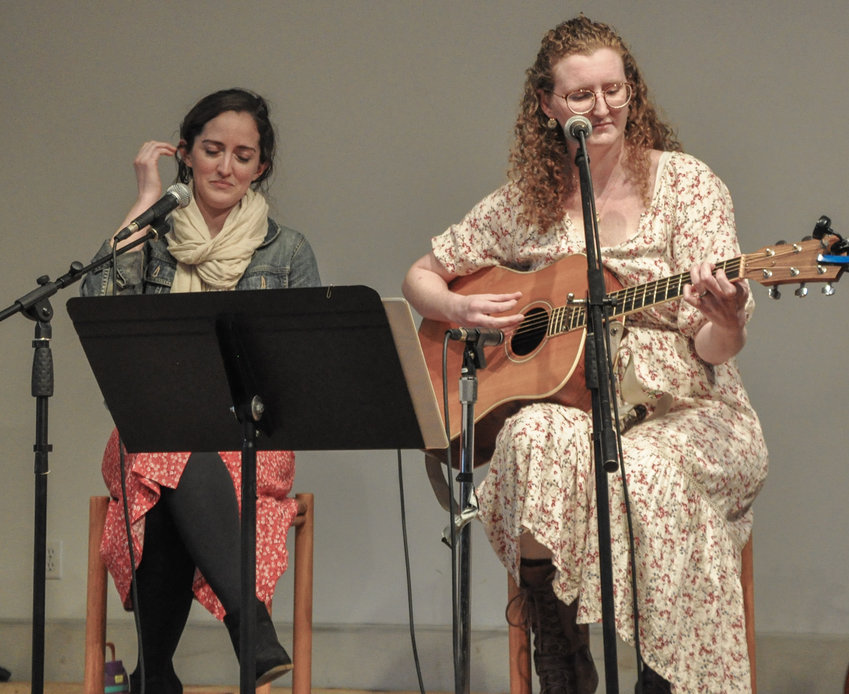 Once joined on stage by Briana Wolgemuth, they perfectly blended their voices through some Stratton originals with titles like “Light in the Dark …

As is my wont, I went to the internet to look up “Calla Sun” and found a slew of links about flowers (lilies to be specific) and how much sun they want or need, etc., but virtually nothing about the performer I was hoping to learn a little something about in advance.

Next I checked Twitter, where I found someone in Poland with the handle @Calla_Sun, but not the woman I was searching for. Interestingly, another popped up simply named @Sunny_Calla, but still wrong. Then I went to Instagram and found an account by that name, but—again—flowers, lots of pictures of flowers.

Utterly confused, I called DVAA performing arts director Matt Carpenter, who informed me that while the program refers to the artist as Calla Sun, she is actually Callison Stratton, daughter of River Reporter columnist Cass Collins and husband Jim Stratton, the same guy who famously opened the wildly popular Grassroots Tavern in New York City in 1975.

Their singer/songwriter daughter Callison is presently referring to herself as Calla Sun. Believe it or not, I still had not made the sound-alike connection. I’m fairly slow on the uptake.

Once Carpenter clued me in, I Googled “Callison Stratton’’ and discovered a mine of information. She is the new director at Narrowsburg’s Fort Delaware Museum of Colonial History, and according to yet another social media site, Instagram, she is a baker, a maker of things and has a craft shop “featuring jewelry, art and crocheted goodies, with a portion of proceeds benefiting women’s organizations!”

Even though I’m still not sure what to call her, she is clearly a young, newly married entrepreneur, and I’m a big fan of her parents, so while folk music is “not exactly my cup of tea” (Joni Mitchell and Brandi CarliIe were on the bill), I was intrigued enough to make a reservation to catch Callison perform live last Saturday afternoon in Narrowsburg.

The DVAA is still very careful about its presentations in the Gloria Krause Recital Hall, restricting in-person attendance while offering live-streaming online, and I had to make a reservation. I was informed that mask-wearing and proof of vaccination were required.

I have to say, I was impressed by the DVAA online services, which not only confirmed my reservation with instructions, but then sent me a reminder the day of the performance, followed by a thank-you for attending. Nicely done. IMHO.

Back to Calla Sun, who was joined on stage for several numbers by Briana Wolgemuth (as far as I can tell, her only name), who is described in the program as “an accomplished singer,” music director and photographer, among her other efforts. The program also said that she now resides in Roscoe, NY, and works as “a professional bread baker.”

It was easy to see how this pair of accomplished women was drawn to each other artistically and professionally. Stratton (that’s one way around it) opened with a beautiful solo a capella version of Billie Holiday’s “God Bless the Child,” followed by the Rhiannon Giddens/Dirk Powell song “We Could Fly.”

The program listed her original pieces as written by Callison Stratton (not Calla Sun), and although I was still confused, I found her voice to be enchanting, her guitar skills impressive, and her demeanor and homey conversational charm quite entertaining. “No program featuring female songwriters would be complete without a tribute to Carole King,” Stratton said between numbers, and although I groaned, (not exactly my cup of tea) she (they?) performed a lovely version of the King/Goffin 1960 smash hit “Will You Still Love Me Tomorrow?” which even I have to admit has its merits.

Once joined on stage by Wolgemuth, they perfectly blended their voices through some Stratton originals with titles like “Light in the Dark on the Sea,” “You and the Moon,” and “My Shadow.”

“My husband and I recently bought a house in Damascus,” the singer with two names informed the audience, “and I’m somewhat obsessed with the moon, which manages to make its way into much of my music.”

After doing a beautiful rendition of “Emmylou,” written by Johanna and Klara Söderberg, Calla Sun suggested she should probably perform one written by Emmylou Harris herself. She sang the 1993 “Prayer in Open D” before additional originals, including something lovely called “Gold in Them Hills,” which Stratton very recently composed.

Yes, I liked her (a lot!), which means I enjoyed folk music, but I’ll likely go to my grave swearing that it ain’t true. Apparently it’s less the genre and more the performer, since I found Stratton and Company thoroughly enjoyable—thankfully, since her aforementioned parents were in the front row, and I’m not really adept at fake gushing.

“Why the name-change thing?” I asked Callison directly, while looking at the sign on the box filled with CDs on stage; the sign stated, “Find me on Bandcamp as Calla Sun.” Stratton said she was “tired of people not knowing how to pronounce her name—therefore “Calla Sun.” Oh.

“I don’t think I know what Bandcamp is,” I said in an aside to Cass, who admitted she wasn’t entirely sure either, but it’s apparently an app for young, hip folks to find and download music, so go do that.

And my original question in the title of this column?  “It’s an old family name,” proud papa Jim informed me after the show, and Mama Cass filled in the blanks for me afterwards. “Jim’s mother’s name was Mavis Callison,” she explained. “There were no more boys in that family, so the name faded. full name is Callison Maeve Stratton.” I’m glad I asked.

To learn more about Calla Sun, visit https://www.callisonstratton.com. Because that’s not confusing at all.

For more on the DVAA Salon Series, visit http://www.delawarevalleyartsalliance.org.

Garden Swap in Narrowsburg this Saturday