No, it’s not a punk band from the eighties—it’s this week’s theme. In fact, I’m all thumbs today, but that’s because I’m down one and learning a valuable …

No, it’s not a punk band from the eighties—it’s this week’s theme. In fact, I’m all thumbs today, but that’s because I’m down one and learning a valuable lesson about the importance of opposable thumbs and what actually separates us from those who don’t have ‘em.

It all began with a slight mishap in the kitchen, and by “slight mishap,” I mean a nightmarish scene out of a horror film, replete with blood-spattered walls, blood on my dog, and blood-soaked rags in both bathrooms. You know those pull-tab lids on tuna and soup cans? Uh huh. Suffice it to say that after my left thumb developed a heartbeat of its own, I wrapped my sliced-up digit in a bandage, put a rubber band around it and drove off—albeit lopsided—in search of medical assistance.

Four stitches and one hell of a headache later, I returned to the scene of the crime and sighed. “Well, this should be fun,” I moaned to the Wonder Dog, who was still sporting bright red streaks in her fur. With plans to check out the Sullivan Freeze for the Cure event, to be held at the White Lake Firehouse in Bethel, NY last Saturday, I was grateful not to have signed up to actually brave the frigid waters, but simply to snap pics instead. Turns out it’s not that simple with just one working thumb.

Still, I managed to arrive safely and joined the impressive throng of those who were about to make the leap. I then proceeded to do my usual amount of schmoozing and clicking while simultaneously bemoaning my thumb-less fate to anyone within earshot. Spotting event organizer Terry Grafmuller, I asked him to share some thoughts before taking the plunge with his “Team Strike Out Alz” cohorts.

“Several of our club’s members are Sullivan County residents,” Terry explained, “who raise funds and awareness each year to combat Alzheimer’s through their participation in the Subzero Heroes event on Berean Lake in Ulster County. Understanding that it’s difficult for friends, family and members of the community to make it to that lake in February, we hold an event in our own backyard.

“In association with the White Lake Firehouse,” he continued, “we decided to hold this ‘warmup’ polar-bear plunge before the main event next month, as a way to raise more funds.”

A follow-up email from event co-organizer Sue Bunce contained some official stats of the inaugural Freeze for a Cure. “Thanks for coming out today,” Sue wrote with nary a mention of my horrific injury. “We estimated over 100 spectators and 25 jumpers showed up to their support. As of today,” she added, “Sullivan County teams have raised over $14,000.” Wow, man.

For those interested in making a donation or attending the main event on February 25, go to www.subzeroheroes.org. And be sure to check out our Facebook page for more pics. 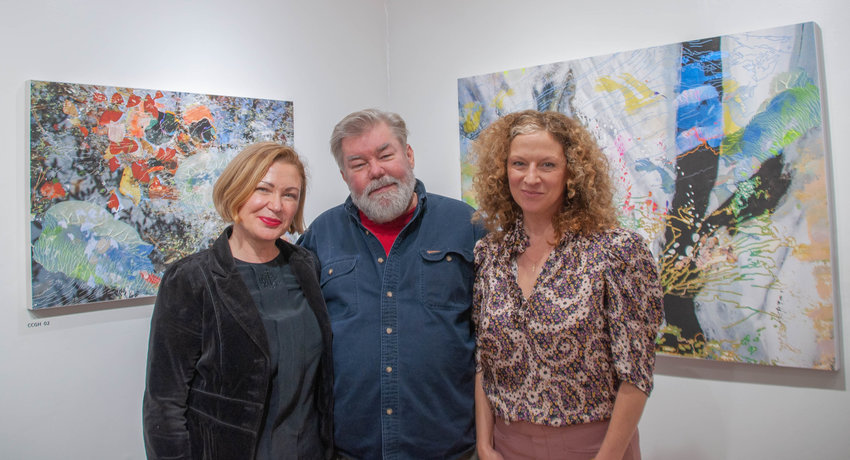 "She builds community,” Geoffrey Hutchinson, center, said of Nonna Hall, left.“Not enough people know about her, or this beautiful gallery.” …

Later that same day, the dog reminded me that I had arranged to do more schmoozing with artists Catherine Chesters and Geoffrey Hutchinson at Nonneta and Friends—ceramist Nonna Hall’s beautiful studio/gallery/gift shop, located at 16 Old Brook Rd. in Barryville, NY. Before heading out, I made notes with my good hand, as the left one throbbed.

“Ask Nonna if Tom Thumb and Thumbelina were related,” I scribbled in my notepad but scratched it out. “It’s not about you, dude” the dog said with a wag. “Not about you.”

The new exhibit, titled “Trance Formation,” features the first-time-ever collaboration of painter Chesters and photographer/printer Hutchinson. “Nonna put the two of us together,” Geoffrey explained, as I toured the exhibit with him and Catherine. “She builds community,” he added. “Not enough people know about her, or this beautiful gallery.”

“So, Nonna is actually a part of this cool collab,” I said, in a weak attempt to sound hip and cool. I learned that both artists call Sullivan County home, and Chesters elaborated.

“Geoffrey and I had met on a few occasions, but Nonna thought we should do something together. She told me that she thought we’d have really good energy working as a team.”

The result is a collection of pieces created specifically for this exhibit, showcasing the strengths of both artists and their expertise designing pieces composed of layer upon layer of photography, paint and digitized imagery.

“Well, I would call it digital collage,” Chesters chimed in, explaining that the originals also have additional layers of paint that the print series does not. “It’s been interesting and challenging,” she added when asked about working on “Trance Formation.” “We’d start with one of Geoffrey’s photographs, and then the process of scanning, compositing and painting would begin.”

Alternating layers between the two has produced some beautifully colorful, highly detailed original pieces of art, and a trip to Nonneta and Friends should be on everyone’s to-do list, in my humble opinion.

“What are opposable thumbs?” I asked my phone on arriving home. I couldn’t type the question, but thankfully the newfangled contraption understood my query. “Opposable thumbs are digits that can be put opposite the fingers of the same hand, so that objects can be picked up and held,” Siri responded haughtily in his holier-than-thou electronic British accent. 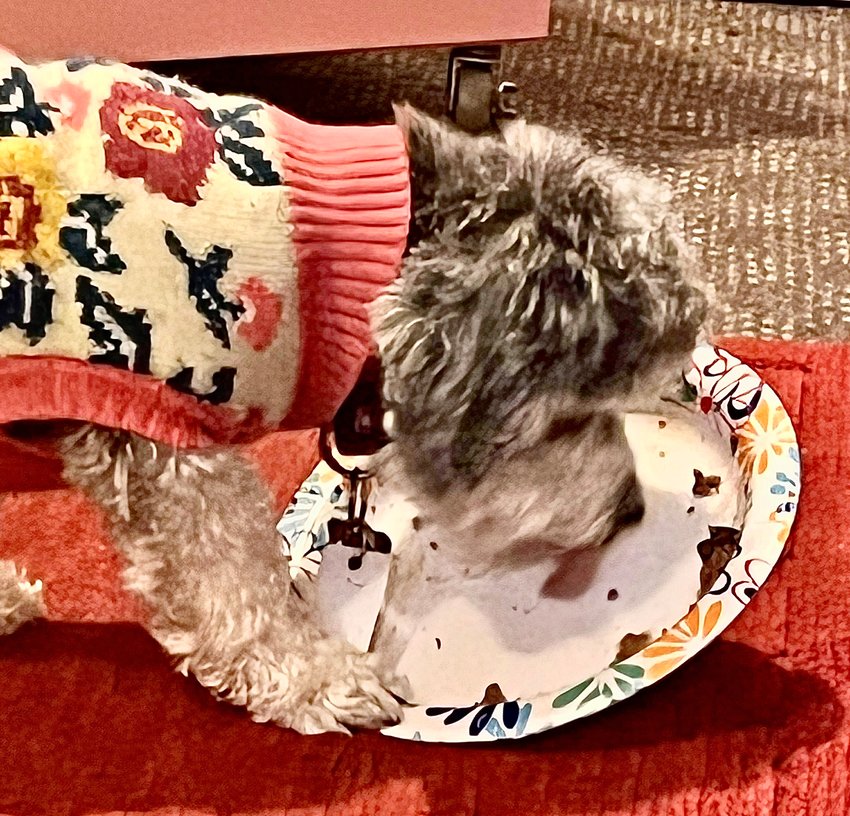 Dogs don't have opposable thumbs, which means they need some help from their human parents in a few areas. Nice to know I’m good for something.

I fired up the computer later that night in order to get some answers to the day’s burning questions.

Pecking at my keyboard, I learned that animals with opposable thumbs include certain frogs, koalas, pandas and opossums. In addition, many birds have an opposable thumb of some sort, and several dinosaurs had opposable digits as well.

“What about Dharma? I typed with one finger.

“They’re very much like us in many ways, so we don’t often tend to think about our basic differences—like the fact that dogs don’t have opposable thumbs, which means they need some help from their human parents in a few areas.” Nice to know I’m good for something.

Ask the Google: Q: Who was Tom Thumb?  A: “Charles Sherwood Stratton, aka General Tom Thumb (1838-1883), was an American showman noted for his small stature. He was the first major attraction promoted by the circus impresario P.T. Barnum.”

As for Thumbelina, she’s the heroine of “a fairytale about a tiny girl and her adventures with marriage-minded toads and moles. After she successfully avoids their intentions,” (why is there always a toad in these stories?) she eventually “falls in love with a flower-fairy prince just her size.” And they lived happily ever after. I assume.