Arts and Leisure. That’s my job.

I grew up on the banks of the Susquehanna River and as a kid, fancied myself an amalgamation of Mark Twain’s Tom Sawyer and Huckleberry Finn. In the good old summertime, my pals and I played …

Arts and Leisure. That’s my job.

Back to back: Bethel Woods
By JONATHAN CHARLES FOX

I grew up on the banks of the Susquehanna River and as a kid, fancied myself an amalgamation of Mark Twain’s Tom Sawyer and Huckleberry Finn. In the good old summertime, my pals and I played down by the water, catching crayfish and tadpoles during the day. As evening approached, we’d race outside after dinner to play kick the can until the sun set, before poking holes in a jar and catching fireflies, giddy with joy. “It was a simpler time,” I said to the dog, petting her for comfort—mine more than hers, I think.

As I watched the lightning bugs flickering in mid-air around Camp Fox last night, all this and more haunted my reverie. Truth be told, I felt happy and sad simultaneously, and grateful, too. Grateful that I chose to make the Catskills my home. Grateful for the memories. I’m grateful that some of those kids are still my friends today, and grateful that I get to write about the world of arts and leisure here in the Upper Delaware River region.

“What is arts and leisure, exactly?” a ticket-taker once asked when I presented my New York Press Association (NYPA) credentials to gain entry to something or other. “Funny you should ask,” I responded, and proceeded to bore her to death with a loosey-goosey interpretation, making it up on the spot. This past week has been a good example of both, but to be sure, I checked online to see if I was still operating within the parameters of my job description.

According to the Google, “The arts and leisure sector includes a wide range of establishments that operate facilities or provide activities to meet varied cultural, entertainment and recreational interests of their patrons.”

I dug deeper, searching for an even more definitive explanation. Widely considered “pioneers in language reference for 200 years,” the Collins dictionary defines the world of arts and leisure as “the imaginative, creative and nonscientific branches of knowledge considered collectively, especially when studied academically.” OK, then.

When I spotted an online article last week about local artist/musician Paul Kean, it rang a bell. I recalled Paul once mentioning a pet project that he had in mind, one that celebrated the 1969 Woodstock Music and Art Festival, which took place just a few miles from my home.

“Hmmm,” I muttered to the dog, “music and art? Sounds right up my alley!”

The article, written by Robyn Taylor for www.wpdh.com , detailed what I already knew: Kean’s desire to see the signs along Sullivan County’s Route 17B as “less boring and more noticeable.” Taylor’s piece went on to describe Paul’s thoughts that “there should be something in the sign that captured the spirit of the Woodstock festival.”

I spoke to Paul, who explained that he had heard from Dan Hust, the county’s director of communications, who loved his idea of embellishing the existing signs, had proposed it to the proper authorities, and gotten the green light to move forward with Kean’s pro bono project.

“It’s happening this week!” Paul exclaimed. “Join us. I think Dan might swing by. Maybe you could take some pics.”

Having decided that the outing fell under the definition of both arts and leisure, (Paul said I could help!) I happily agreed. I met up with him and fellow musician Debbie Fisher (they perform as Fisher & Kean) roadside and whipped out my camera in order to commemorate the before and after of Paul’s vision as it sprang to life.

Hust arrived and I asked what he was thinking.

“This is what I always dreamed would be the case with these signs,” he said. “They needed to be something that reflects the Woodstock ethos—colorful, vibrant, approachable.” 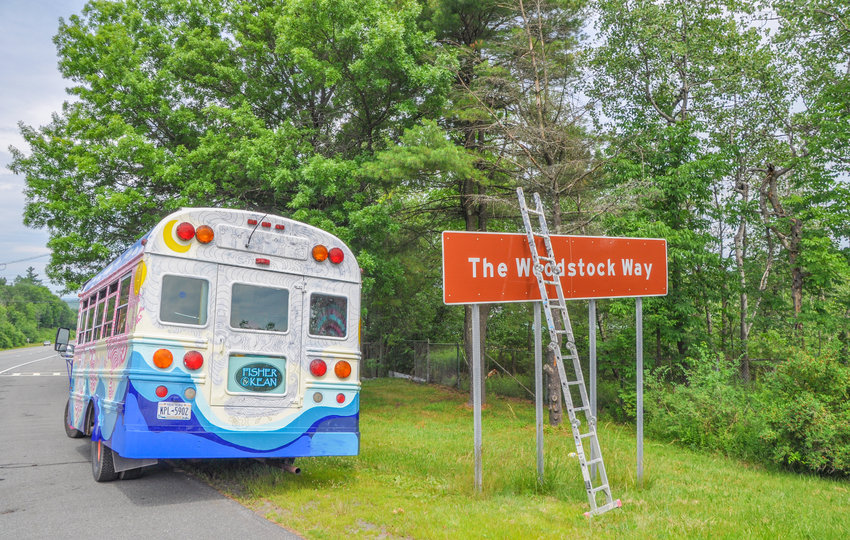 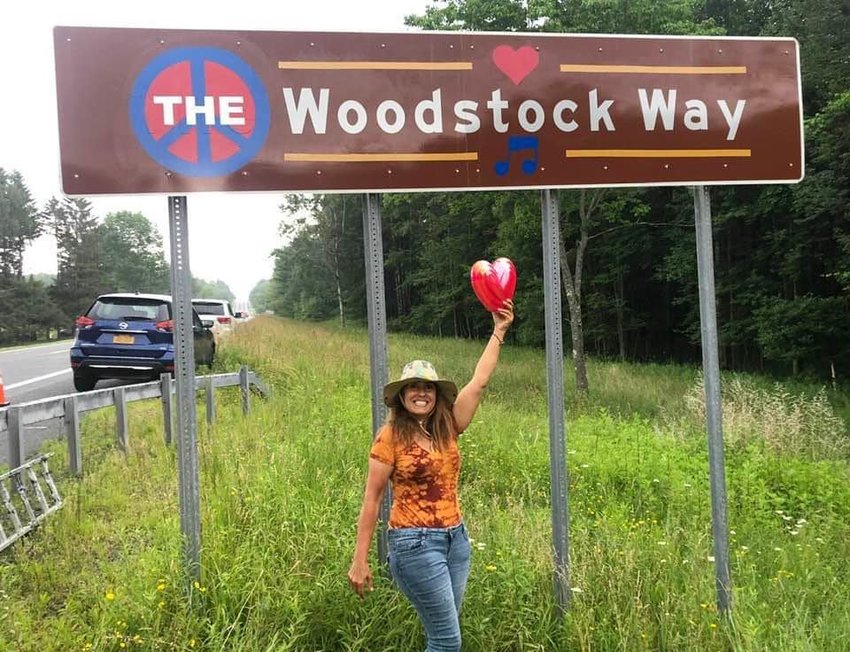 ... and after. Debbie Fisher shows her love for the finished sign in Fosterdale.

He continued, “These signs needed to be more than just white letters on a brown background. I’m incredibly grateful to the county legislature, the state legislature and the state Department of Transportation (DOT) for making this happen. This sign was personal for me.”

Hust said that he “wrote the legislation for this signage when we were first figuring out what to do for the 50th anniversary. We’ve got Route 97 designated as the Upper Delaware Scenic Byway, Route 17 as the Quickway, and I wanted people to know that Sullivan County is where the Woodstock Music and Art Festival happened, not Woodstock in Ulster County.

“And of course,” he continued, “17B played such a huge role in that happening, so we got the county to pass it, then the state, with the help of Assemblywoman Aileen Gunther and then-senator John Bonacic. From there it went to (former Gov.) Andrew Cuomo, who signed it, which allowed these signs to be fabricated by the DOT and put up not only here, but in Fosterdale as well.

“So this means a lot to me,” Hust continued, “both personally and professionally, which is why I reached out to Paul when I saw that he was interested in the same thing. I loved his vision, which added the color, life and vibrancy to these signs. Now people are going to see it and say ‘Hey! That’s The Woodstock Way!’”

Is it arts and leisure as my press pass dictates? It is. At least in my humble opinion.

‘They Shoot Authors, Don’t They?’