The boarding house gave families happiness and an escape from the city. Now a new book recounts that way of life.

Located on the former Welsh dairy farm and owned by Norman and Edith Dennis, the big house …

The boarding house gave families happiness and an escape from the city. Now a new book recounts that way of life.

Photo contributed by Julia Hochstadt Sweet
Fun in the lake at Silver Lake House.
Posted Thursday, October 14, 2021 8:30 am
What the property was like

They stayed at the main house, with its many bedrooms, parlor and living room, or in one of the cabins. They went to the lake, to the barn with a horse and a rope to swing on, to the “rec room,” which was converted from another barn. It had a pinball machine, a ping-pong table and a dilapidated piano. which was deemed adequate for use by the kids.

There were endless fields. The Duttons’ cows to watch. Shuffleboard. People around, children from the city. Their families.

It has changed now, of course. The house was sold; the cabins are gone. The dock at the lake is gone, the shuffleboard court has crumbled, Sweet writes in her book.

“From my family house a quarter mile down the road, I continue to walk up the hill and survey the house and the grounds,” she wrote in the final chapter. “Even in their retired state, they still call forth all the good times of decades before.”

Alarms save lives
By ANNEMARIE SCHUETZ

Located on the former Welsh dairy farm and owned by Norman and Edith Dennis, the big house welcomed families from the city and gave them a taste of country life.

“To be a guest, it felt like you were coming home,” she said. “Children could go play in the barn. They had the freedom to go here and there, or just sit and read.”

The house opened for boarders in 1951—late, compared to many local boardinghouses—and closed in 1975. In between those years, it left its mark on the lives of the people who visited and worked there.

Sweet remembers them. The people, and the boardinghouse way of ife, are chronicled in her book, “Memories of Silver Lake House,” a tribute to an era that vanished in the 1970s.

An advertising card from the early years boasted that “there was running water in the house!” By the late 1950s, there was a washing machine too—great if you had a baby, as Sweet’s family did—and a black- and-white TV in the living room.

“We watched Nixon resign on that TV,” she said. “Everyone was crowded into the living room.”

Sweet was a guest till she was 15 years old, and then she went to work at the house, crossing a line and becoming, in a sense, one of the locals.

Which is why her book has such deep regard for the people who lived—and still live—in Tyler Hill and the surrounding area. A recognition and respect for their values. “Working there changed my life,” she said. “It taught me so much.”

Mostly, she talked about the work ethic. “When people remembered Edith, they said what a good worker she was,” Sweet said. “What a hard worker. If you were a good worker, you were valued; that was a big compliment.”

Sweet started as a chambermaid, then later worked in the kitchen. The chambermaids cleaned the main rooms, bedrooms and  cabins. (For an idea of the daily work, see box.)

They had a break in mid-afternoon, before supper preparation began. Edith Dennis took a rest. The girls hung out, talked. Rested a bit too, maybe.

“Edith was up by 6 a.m.,” Sweet said. “She started the pie crust for the pies” to go with the day’s meals, “and then she got breakfast going.” Sweet waited tables  during the meal. There was a second breakfast for the farmhands.

After breakfast came the chambermaid’s chores.   Sweet swept the porches. Rooms were cleaned. “One girl did the main house, and another girl did the cabins,” she said. Then laundry got started; there’s still a wringer-washer in a shed on the property. Sweet recalled a girl poking clothes through with a yardstick. Those wringers had to be handled with respect.

Dinner was prepared. Country-style, that was the midday meal, and it was not small: meat, salad, a cooked vegetable, potatoes, bread and dessert. “It wasn’t fancy, but it was very good,” she recalled. (There’s a week’s menu in the book, if you want to know more.)

And after that? Miscellaneous chores. Edith was in charge of the supplies, Sweet said, so the stock of food and soap and the myriad other things that went into running a boardinghouse—all those things had to be checked and reordered if necessary.

Prepping for supper, cooking it, serving it, cleaning up.

Endless work. Hard work. But if one carries away anything from “Memories of Silver Lake House” it is this: that the people who worked so hard deserved respect. Their work gave joy and meaning to the summers of so many city visitors.

What else did they do for fun? She mulled it over. “I guess we just did something different. A few times, we helped unload hay.” Early in the summer, there was furniture to be set up and painted, touch-ups to be done. The sign to paint. “I did a lot of painting.”

It sounds hard, especially nowadays. But “we laughed in the pantry,” she said. “Working there meant I could be here, and I wanted to be here.”

When the work was done,  there was the lake to swim in, if you weren’t put off by the leeches.

“You might come out of the water and you’d have leeches attached to your legs,” she said, smiling.

It came to an end in 1975. “Vacations changed,” she said. “People were using campers.” Others likely chose to fly to destinations further afield.

Sweet continued to work. She came back each Memorial Day, but now she did most of the chores. “I did food service, cleanup, and cleaned all the rooms, including the cabins.” Even with the extra work, it was worth it; she could still be in a place she loved, even as times changed and she herself grew up. Her parents bought a house just down the hill. Sweet became a math teacher in Massachusetts. Her mother still lives in their Tyler Hill home today; her father passed away in 2009.

Sweet, on an October day, was visiting. And talking about the past.

“The effect the experience had on me—it was about country sensibilities. Being a smaller community. Knowing everyone. It had a huge impact on my outlook in life.” 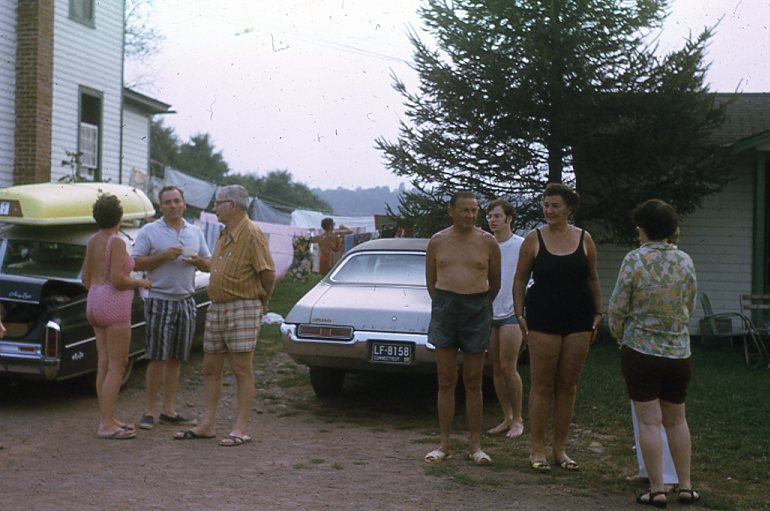 Guests get ready to go swimming in the 1970s. 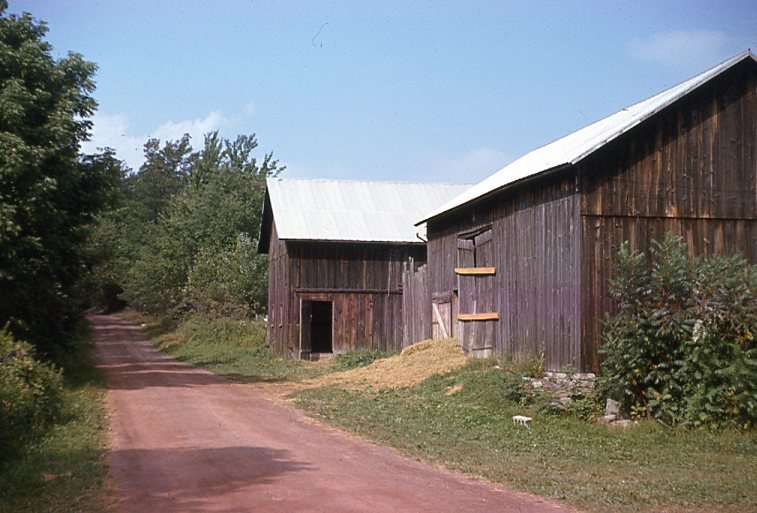 The barn in the foreground had a horse and a rope swing. The rear barn was the "rec room." 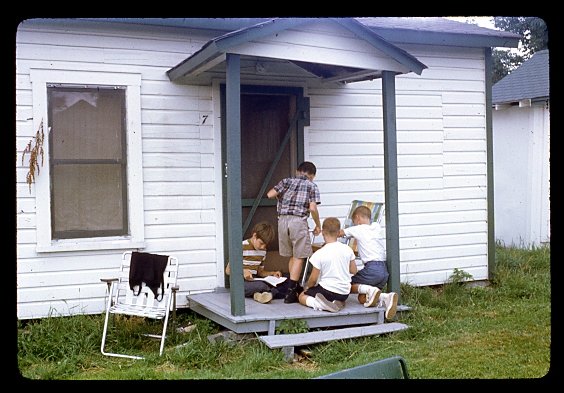 Boys at on of the Silver Lake House cabins. 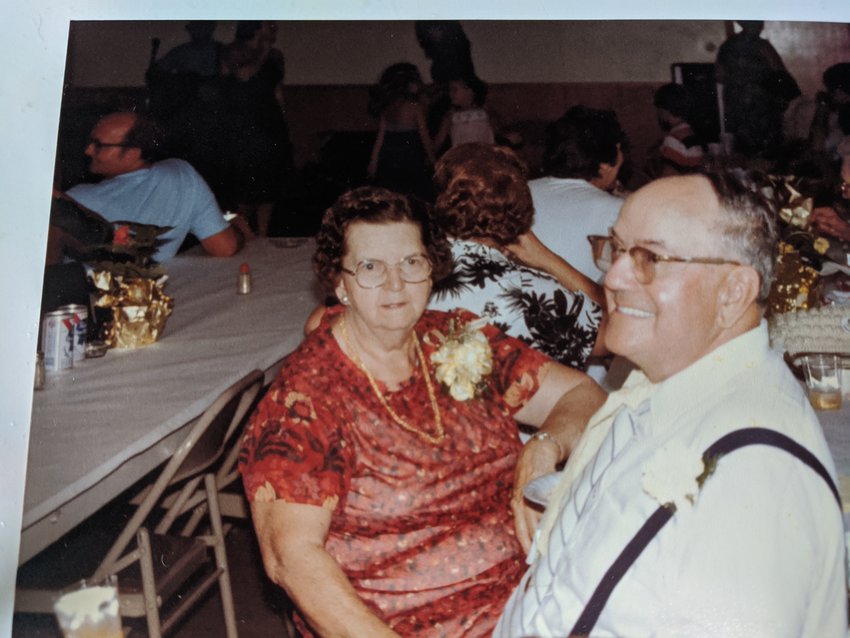 Edith and Norman Dennis, owners of the Silver Lake House. 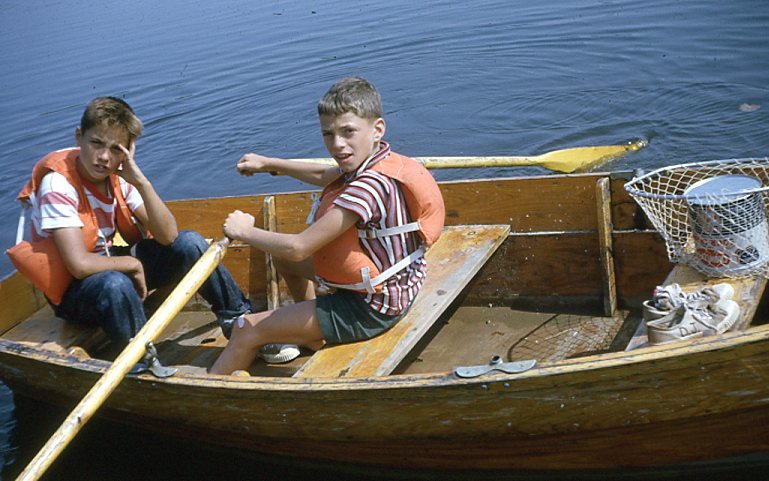 Fishing was a lot of fun for kids at Silver Lake House. 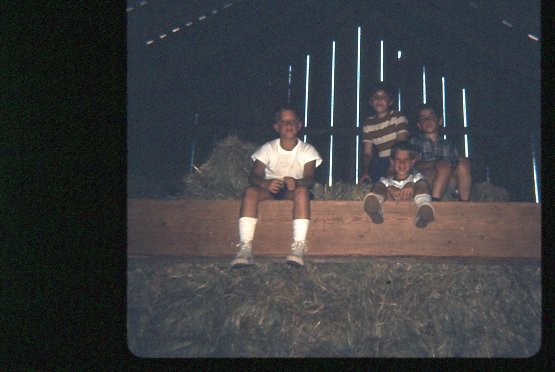 Sitting on a beam in the barn at Silver Lake House. 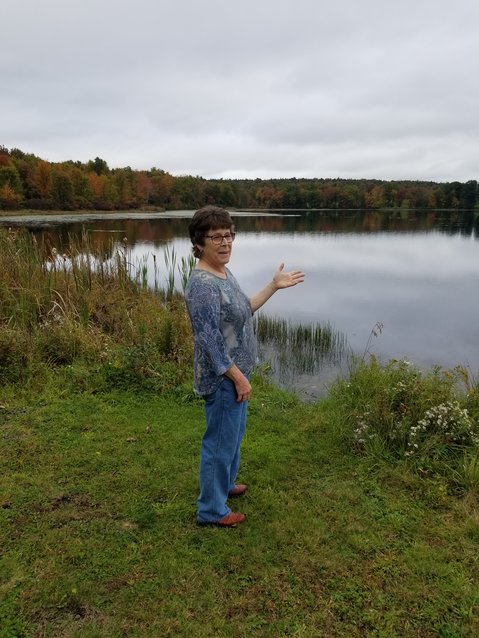 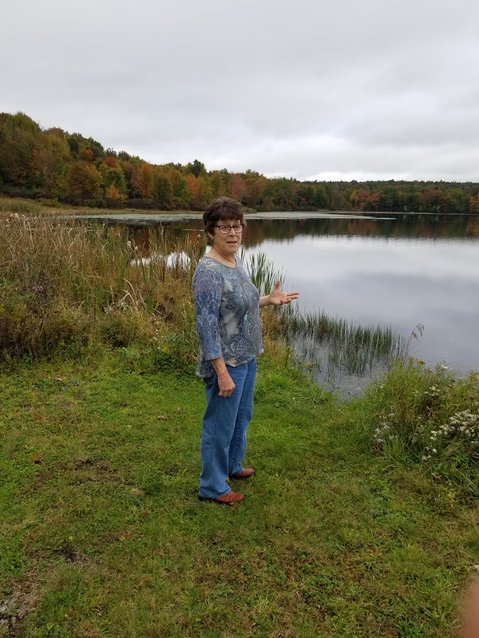 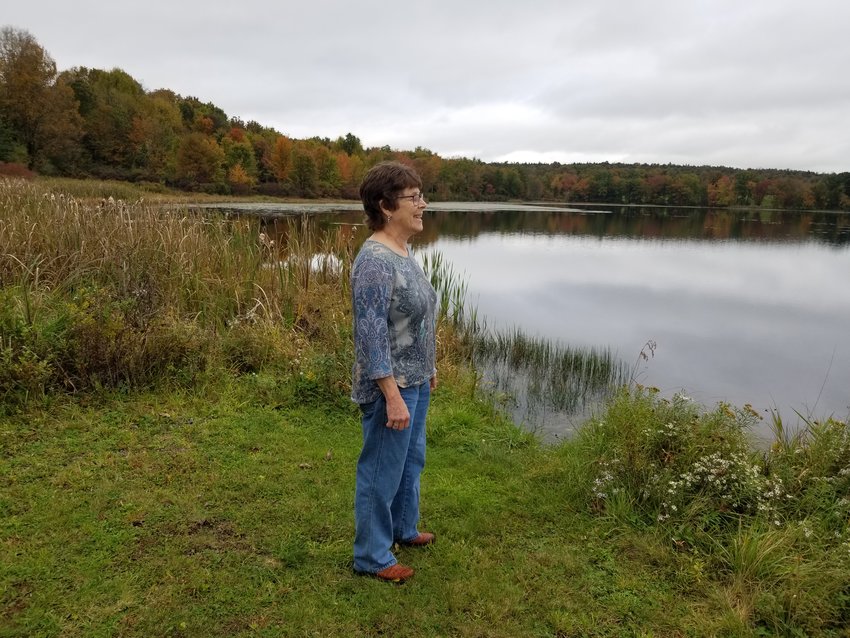 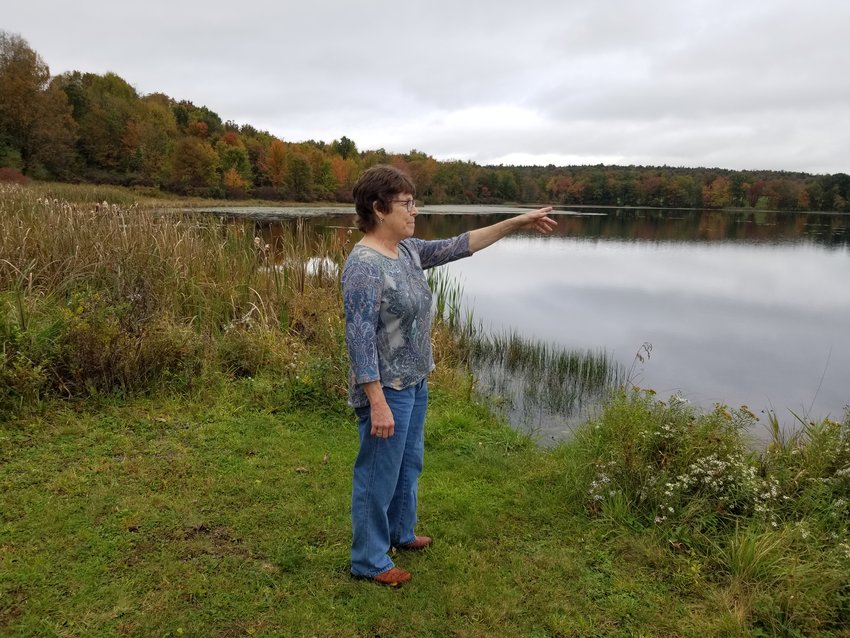 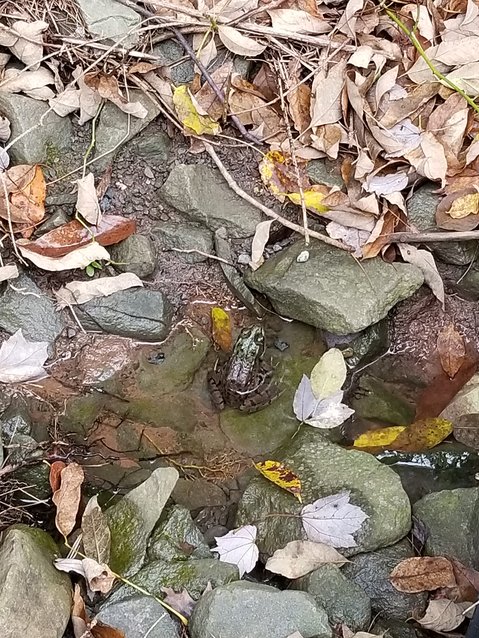 There were plenty of surprises for city kids at Silver Lake House. 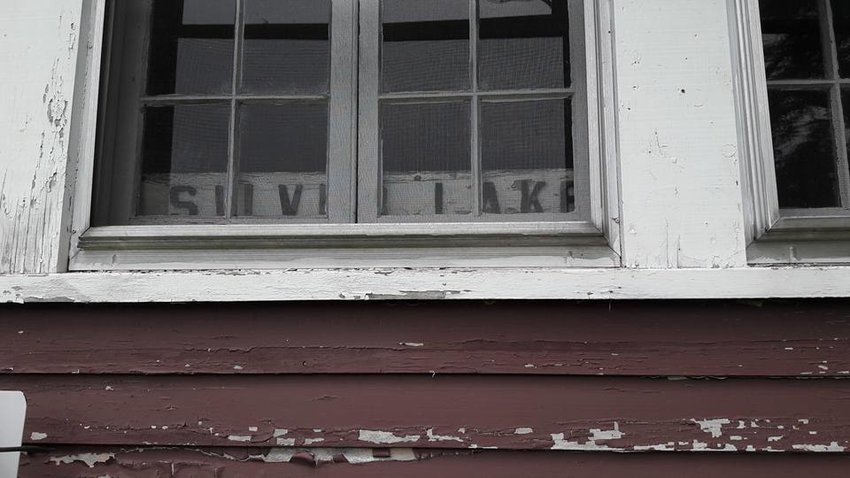 The Silver Lake House is long gone, but the memories linger.
Previous Next

Where is Owen Walsh going?

It’s the most wonderful time of the year