MONTICELLO, NY — The settlements against manufacturers for their role in the opioid crisis has taken in billions of dollars nationwide. Even that sum seems small when weighed against the lives …

Legislature opts in to opioid settlement
By LIAM MAYO

MONTICELLO, NY — The settlements against manufacturers for their role in the opioid crisis has taken in billions of dollars nationwide. Even that sum seems small when weighed against the lives that opioid misuse has taken or ruined.

“I share a lot of folks’ concerns that the opioid settlements don’t go far enough,” said Liddle. Many protest that the Sackler family, founder of Purdue Pharma and a key contributor to the opioid crisis, still has its wealth despite the untold numbers of deaths.

At the same time, the money these settlements provide isn’t just a drop in the bucket—even that fraction of the whole that has trickled its way to Monticello. “This is really going to change how we fight this fight in Sullivan County.”

Settlement money started landing in county coffers earlier this year. The county’s five-year plan for spending its share of the money records $1,013,684.18 in funds available following a payment in May, with an additional approximately $214,000 available come September. The spending plan continues through 2027, with between $369,186.74 and $589,461.09 in funding available annually.

The county’s substance use task force has created a plan for using that money, and the Sullivan County legislature approved its spending from July 1, 2022 and July 1, 2023, in a meeting on June 16. 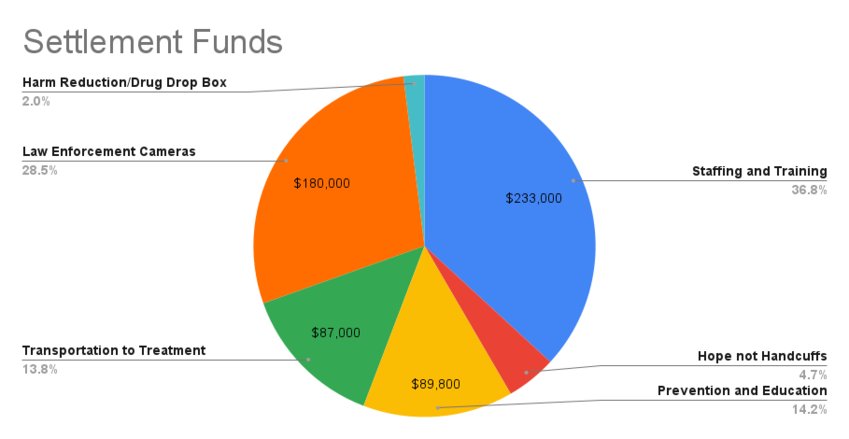 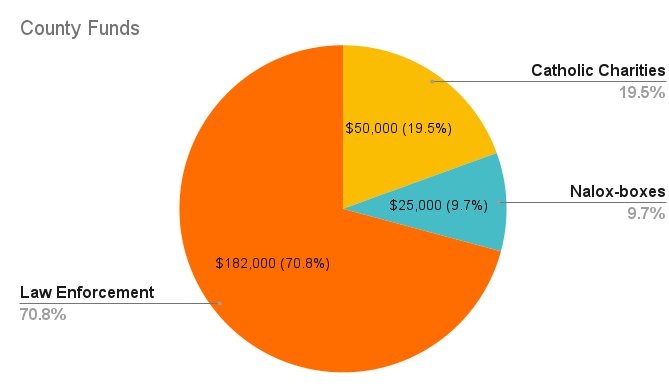 The task force aimed to include as many groups as possible in the spending plan, said Liddle. Not all groups received as much money as they requested, but every group that requested funding got something.

The spending goals build on and support existing efforts from the task force’s Sullivan County partners. Hope Not Handcuffs received $30,000 to support its arrest-diversion program; it partners with local police departments to connect people with support services as an alternative to jail time. Local police departments have been doing a great job in this partnership, said Liddle.

While the settlement money isn’t generally going toward creating new positions, it will help support the county’s social workers by funding their continuing education and renewing of licenses and the like, efforts that have been funded by individual workers, he said.

The task force has also invested in providing the county’s law enforcement agencies with needed tools and equipment. The legislature authorized $180,000 from the settlement fund for video surveillance assets for use in narcotics investigations, and a further $182,000 from the general fund for further equipment and software.

The limited number of police in the county means officers need technology and tools they don’t have to be effective, said Liddle. In addition, the structure of the settlement fund provides significantly less in unrestricted funds after the first year, leading to the plan front-loading unrestricted procurement.

“(The plan) does a lot of good in a lot of different places,” he said.

Budget up, taxes down

Giving thanks in Delaware