In the driver’s seat: Keith Majka and the gears of time

KAUNEONGA LAKE, NY — Return with us now to the halcyon days of open-cockpit motorsports in America.

In the driver’s seat: Keith Majka and the gears of time

RR photos by Ted Waddell
Shack bound. Keith Majka heads to the track’s pit shack for a driver’s meeting before the races.

KAUNEONGA LAKE, NY — Return with us now to the halcyon days of open-cockpit motorsports in America.

That bygone era when racers competed wheel-to-wheel in what are now considered to be classic race cars, ranging from sprints to full-on Indy roadsters.

The Atlantic Coast Old Timers Auto Racing Club (ACOT) is a frequent visitor to Bethel Motor Speedway (BMS), located a few laps at speed from the site of the original Woodstock Festival of 1969. The organization of 260-some members turns back the clock with their array of vintage race cars.

ACOT was founded in 1983 with the stated purpose of being “dedicated to restoring and the exhibition of antique American oval-track, open cockpit race cars” and has an active program of seeking out and preserving auto racing history. 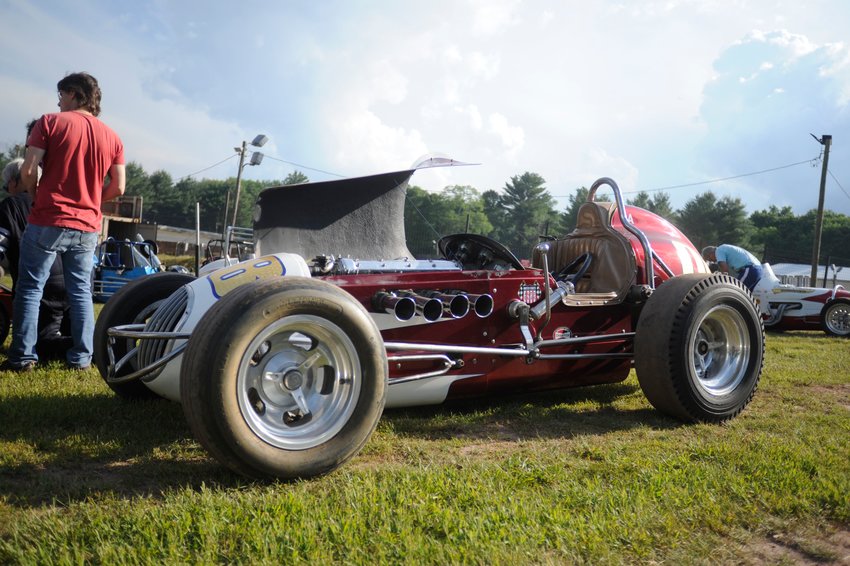 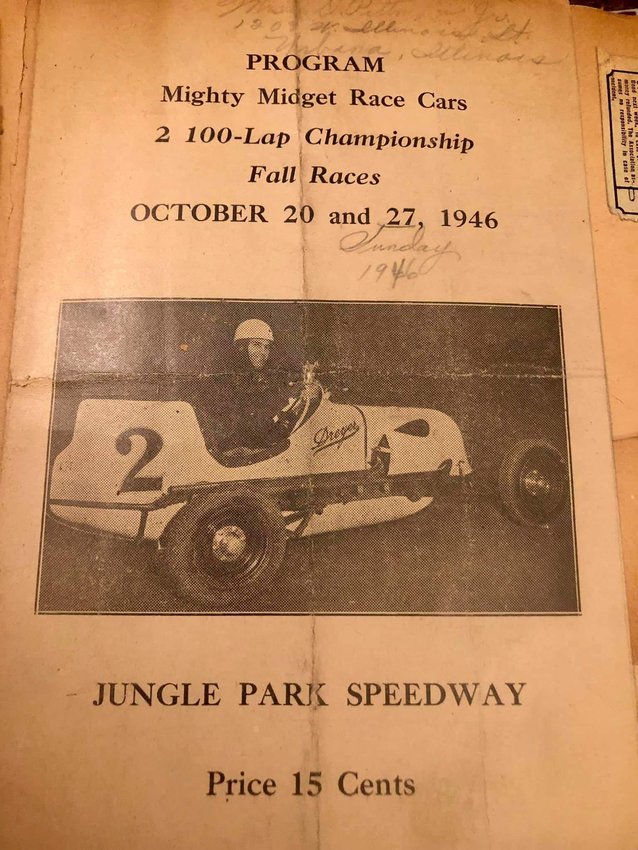 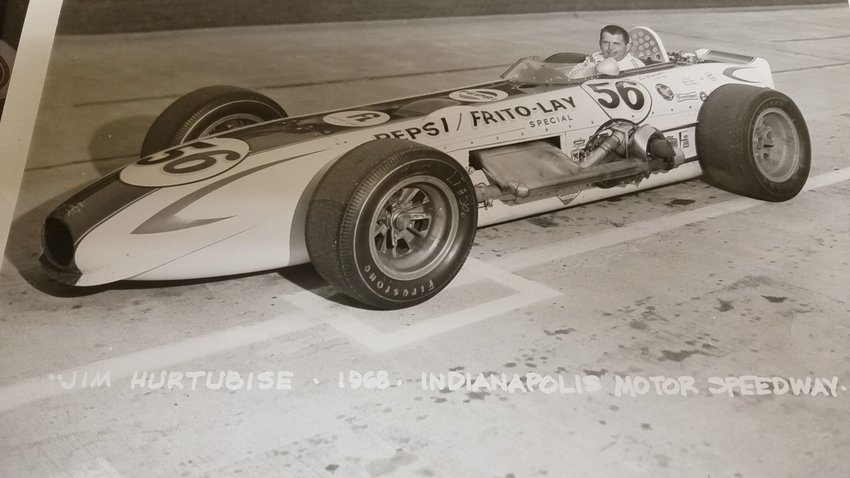 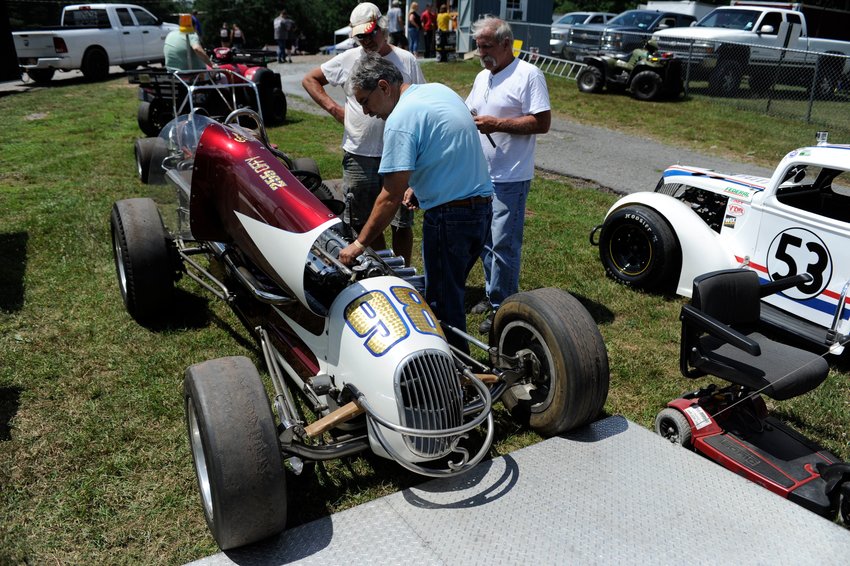 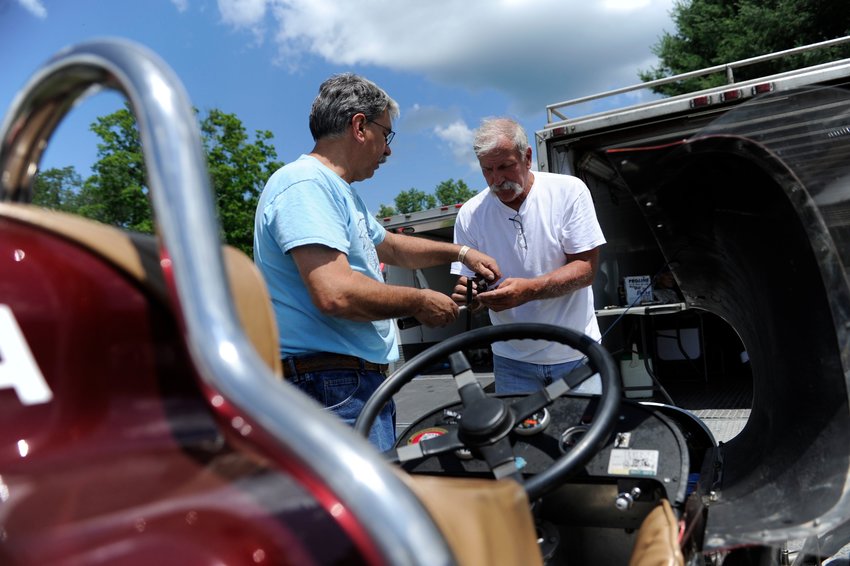 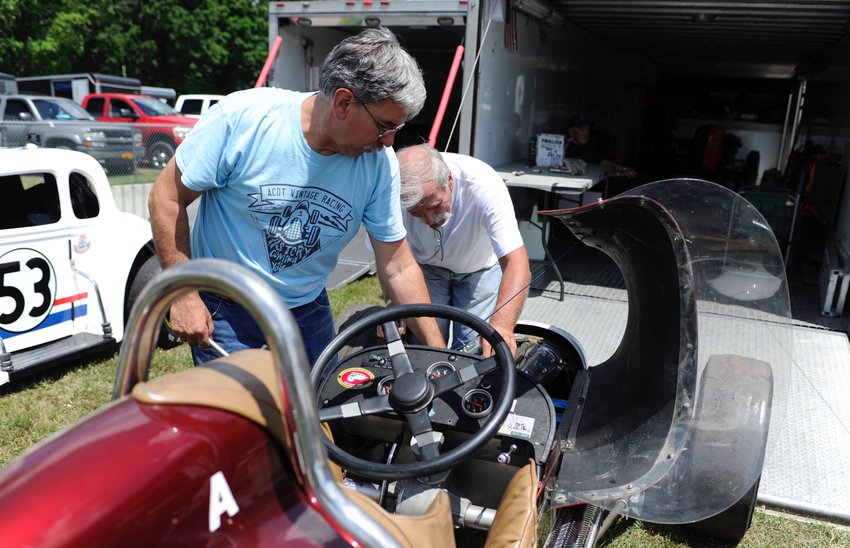 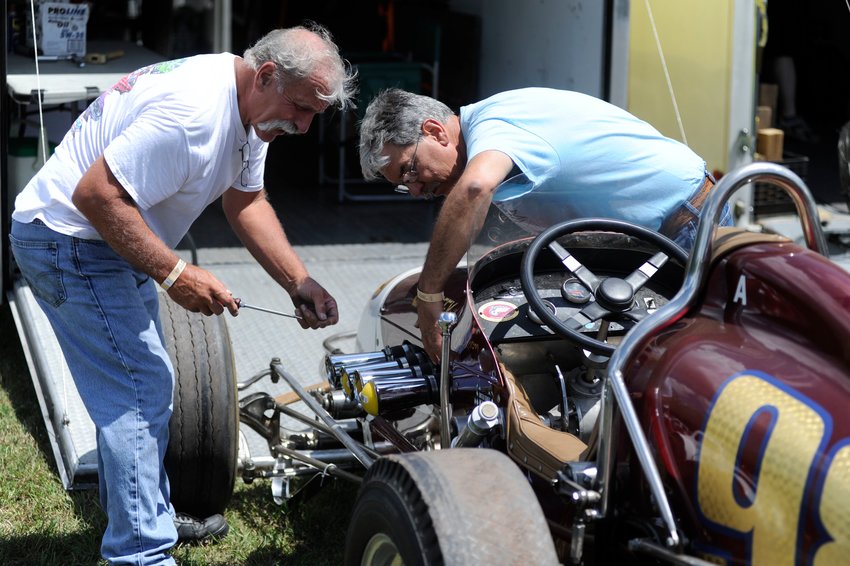 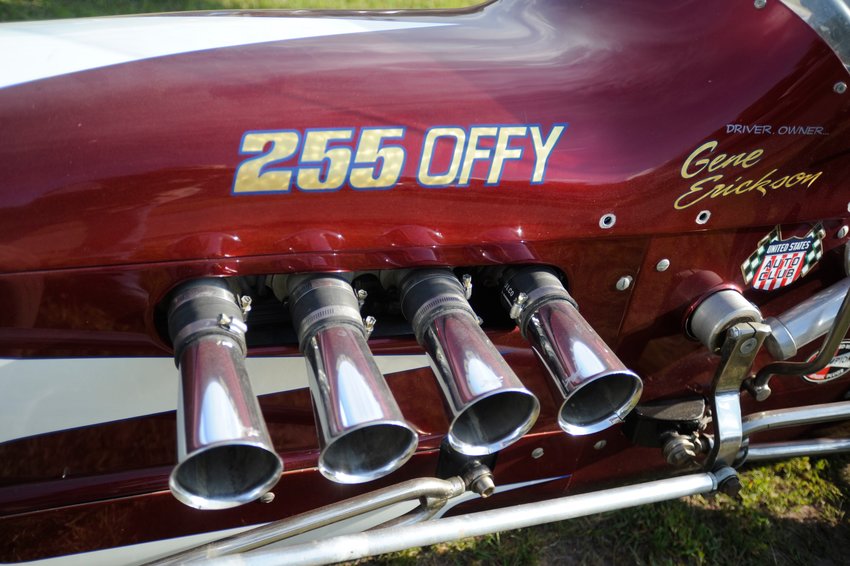 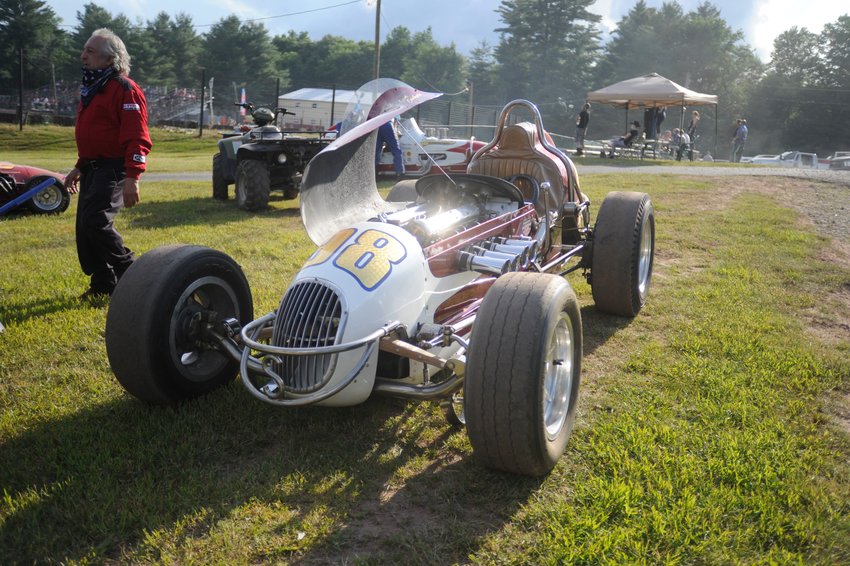 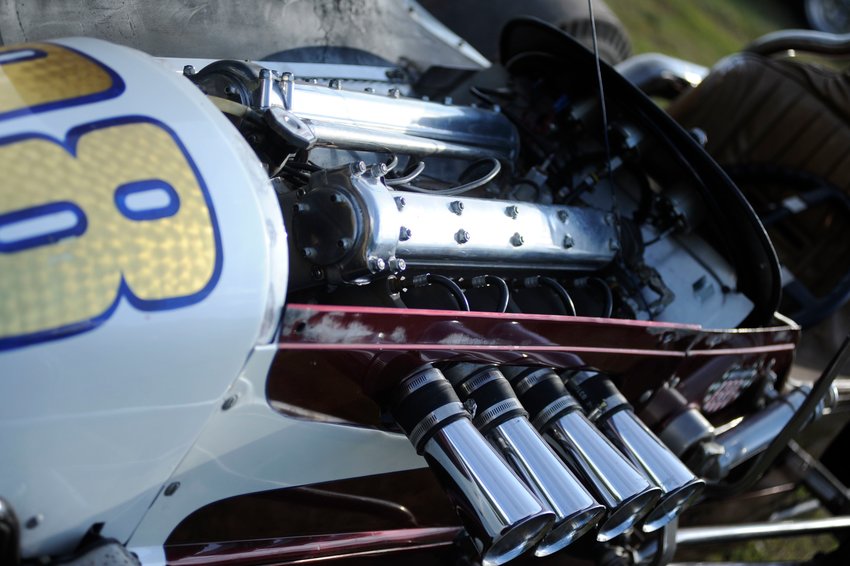 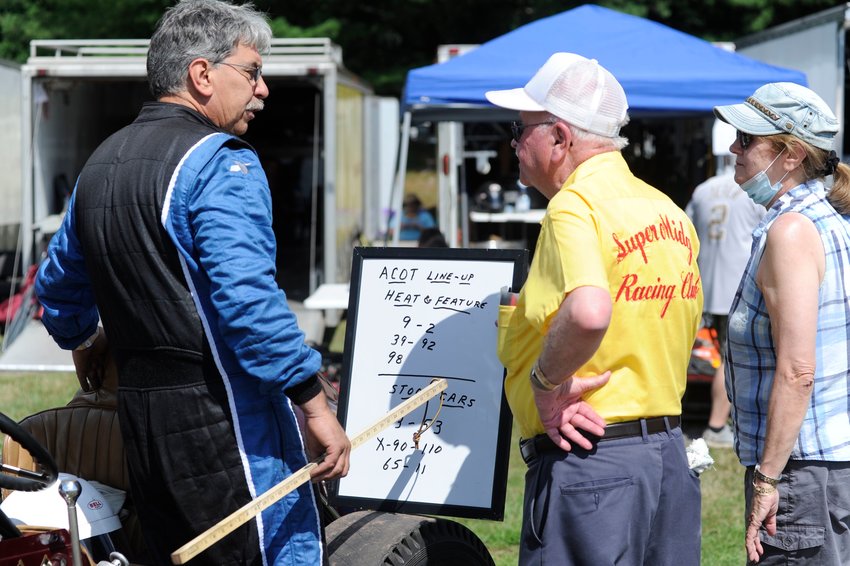 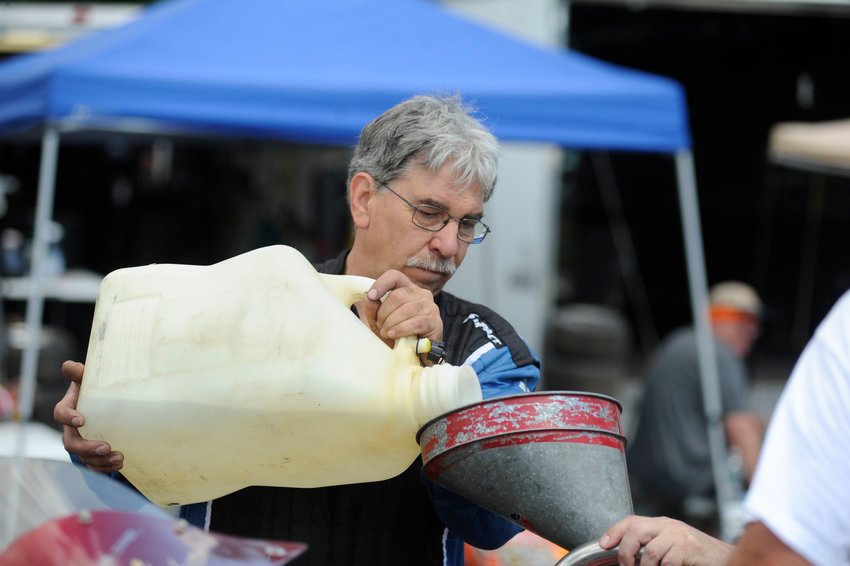 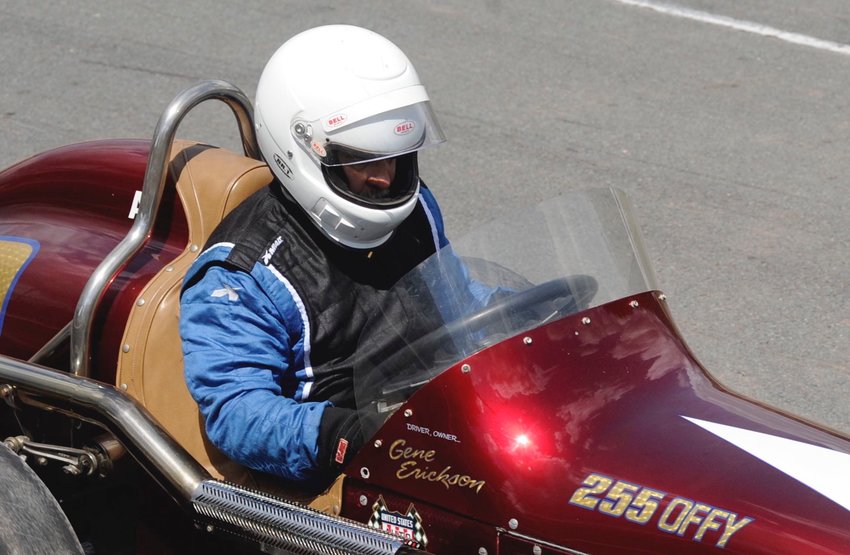 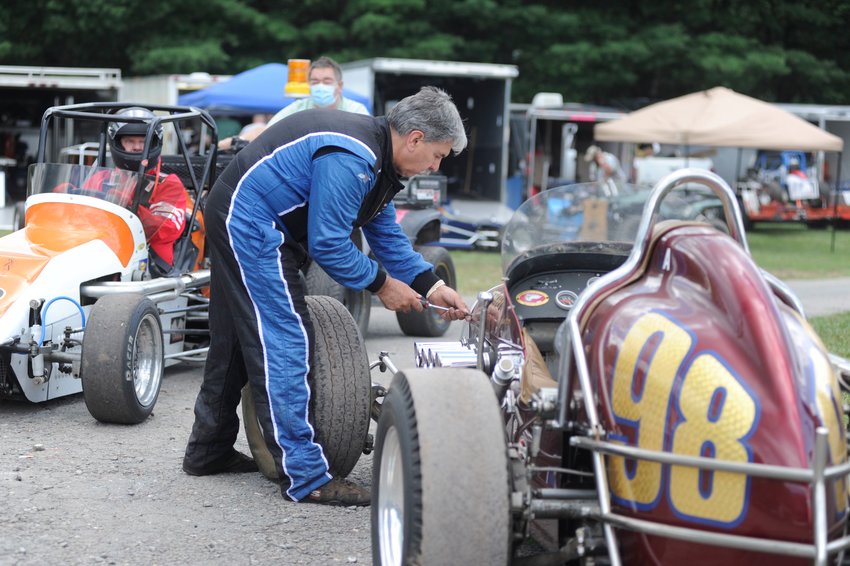 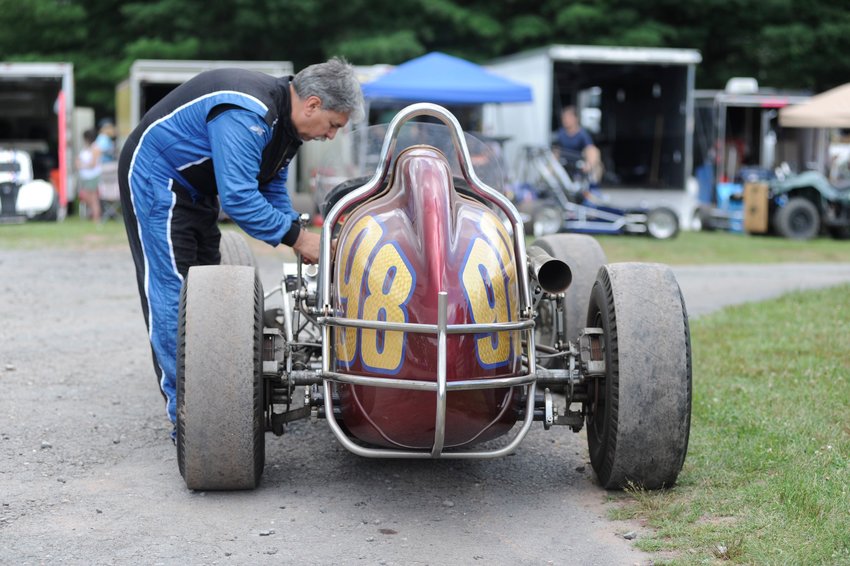 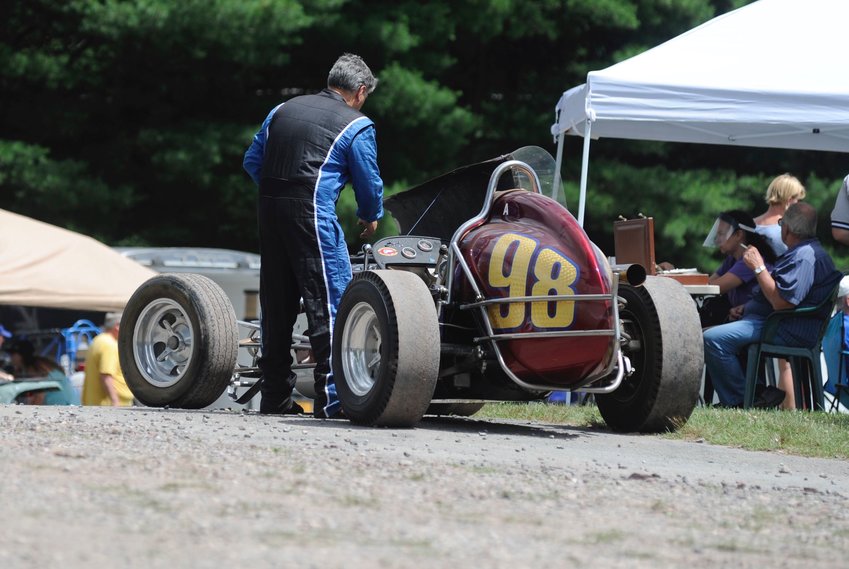 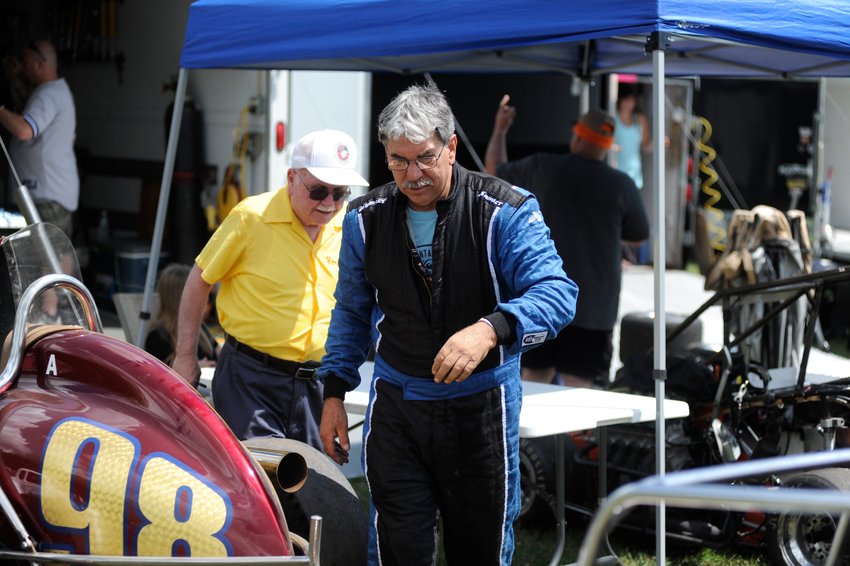 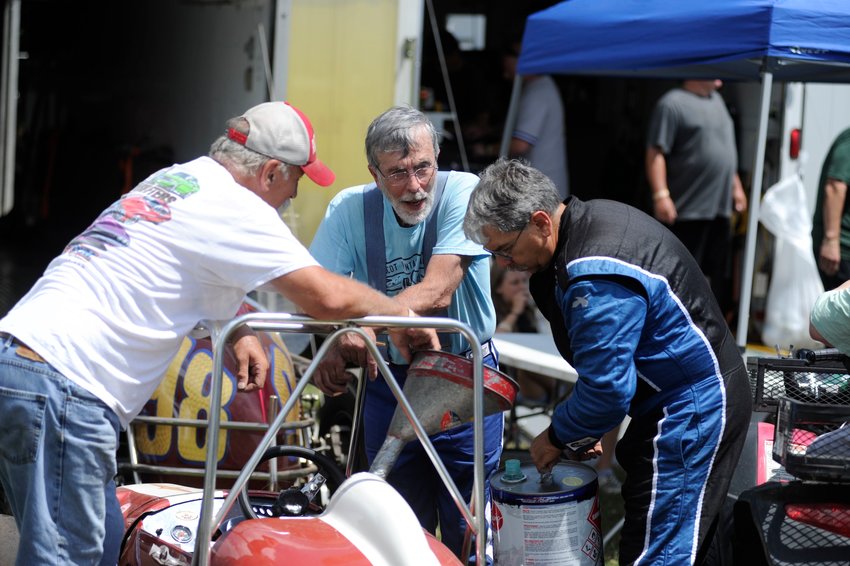 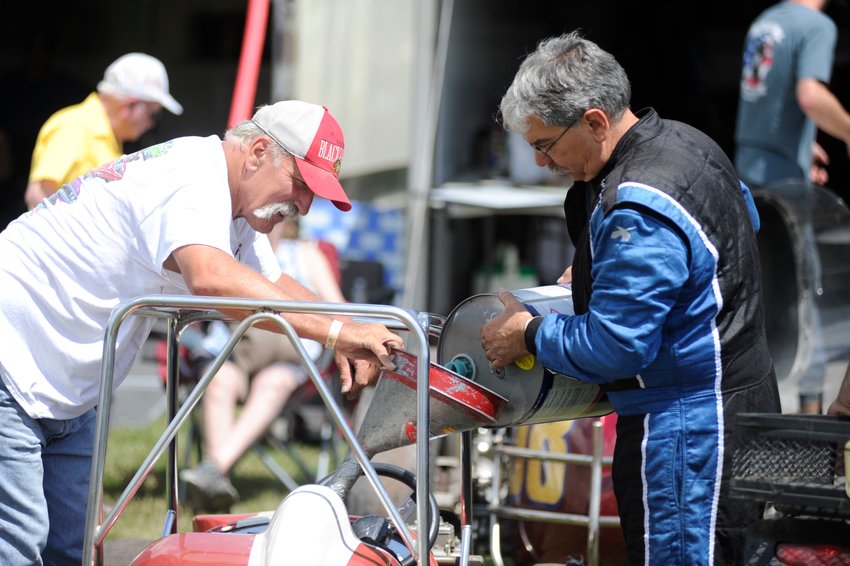 In recent years, the club has shown off vintage rides at OCFS, BMS, Evergreen Speedway, Accord Speedway and other popular motorsports venues.

Keith Majka, owner of a third-generation custom railing enterprise in Paterson, NJ, serves as president of ACOT and is a collector of vintage open-cockpit racing machines.

Majka has roots in the history-rich Upper Delaware River Valley, as his family has owned about 25 acres across the river in nearby Beach Lake, PA since the mid-1960s.

“We still have the cabin where I spent my childhood going up there on weekends during the summer,” he recalled, adding, “My twin brother owned the Big Apple Bar on Route 52, right up until it burned down, and he still owns the property.”

Majka’s recollections of growing up in the area stretches from Beach Lake and over the bridge, above Big Eddy, into Narrowsburg, NY.

“I remember going to Peck’s when it was just a small market right on the corner across from the bridge, and then he expanded, took a wall down and doubled the size of the store, that had to have been in the late ‘60s or early ‘70s,” he said of Art Peck, founder of what would become a series of Peck’s Markets.

Back to the race track.

“As a young kid, three to four years old, my father, Fred, built and owned—but didn’t race—three-quarter midgets,” said Majka on a recent Sunday afternoon at the local oval-track speedway, pointing out “the oldest guy in our group today,” a former driver of his dad’s racecars “back in the day.”

“When I met Joe Klein Sr. about eight years ago, we started talking and I found out he drove my father’s cars back in 1957… I discovered that all these years later,” said Majka.

So, while Majka was adjusting the carbs on #98, originally a 1950 champ car with a rich and storied racing pedigree, I had a chance to escape the blistering summer heat in his custom enclosed car transport trailer and spend a few minutes in the shade talking motorsports memories with the 85-year-old former racecar driver.

“I’ve known Keith for a long time,” said Klein. “I drove his father’s TQ midget in the Teaneck Armory back in 1957.”

Overhearing part of our conversation while picking up some wrenches, Majka chimed in of his friend, “Joe invented dirt,” a humorous reference to the old timer’s days of racing on dirt tracks.

Klein said that after getting drafted into the Army, he sold his first sprint car, a flathead Ford, to one the famous Hell Drivers.

A couple of years later, after serving in the military, Klein hooked up with the Hell Drivers, and along with another death-defying driver with the auto thrill show, performed the Firewall, one of the more dangerous stunts, “hitting it at the same time to give them something different.”

“It’s been a good sport, I love it, I wish I could have done it full time,” said Klein.

Majka started out racing street stock cars in the 1980s at OCFS and moved his way up to small block 320-modifieds, which, over time, became 358-mods.

“We had a successful ten years, quite a few wins,” he recalled, noting they built a lot of their own cars and motors.

These days, Majka collects vintage race cars and, as head of ACOT, devotes a lot of time driving his mechanical steeds in exhibition races and keeping the history of historic auto-sports alive.

The other day at Bethel Motor Speedway, he took #98 out on the track to go wheel-to-wheel with a few other vintage open cockpit cars to give the fans in the stands a taste of what it was like years ago.

As mentioned a while back in this story, #98 dates from 1950 when it was built as a champ car with Troy Ruttman on the throttle and then later transformed into a sprint car.

It was originally fitted with a 255-CID Offy motor that, over time, was yanked in favor of a V-8 Chevy. It eventually underwent a complete restoration by Ray Swann that included installing a famed Offy powerplant back under the hood.

Along the road, #98 witnessed a series of owners and drivers, including a crash several years ago at the 605 Speedway in Irwindale, CA.

Majka picked up the car late last year, and the car’s full history is fully told in an in-depth article penned by Nan Kene-Arthur that was published in the August 1992 issue of Open Wheel Magazine, titled “Restoring Racing’s History.”

Majka’s collection also includes several midget race cars, a couple of classic Kurtis Craft racers and, most notably, a car constructed in 1937 by “Pop’ Dryer for Bill Hillinger to drive in 1938 season, and the “Mallard,” a car that Jim Hurtubise built and raced at Indy.

“It was Hillenger’s first night out in the car at the Boston Colosseum in January 1938,” said Majka. “It won its qualifying race and the main event; it was a clean sweep.”

Of the “Mallard,” he said of Hurtubise (1932-1989), “He was a well-known driver from North Tonawanda, NY who raced sprint cars, champ cars and was an Indy driver. The ‘Mallard’ was the last front-engine roadster to ever qualify and run 52 years ago in the 1968 Indianapolis 500.”

Asked what is the goal of collecting and competing vintage race cars, Majka replied, “The purpose us to keep the history alive, what these guys hand-built with very few tools… The very first midget race cars were built in the ‘30s, and if the guys had a drill press, that was a lot, no computers and CNC programming.

“It was all done by the seat of your pants, all done by grit and determination… That’s what I love about it.”

And of Bethel Motor Speedway?

“It’s a hidden jewel in the Catskills, a beautiful little place,” said Majka. “It’s well maintained, and we have a lot of fun when we go there.”

As a sidelight to motorsports history, check out a new program on the Peacock Network, produced by Dale Earnhardt Jr.

Majka appears in episode five as the local historian who tells the story about Hinchcliffe Stadium in Paterson, NJ.

The ‘Mighty M’: Behind the scenes