KAUNEONGA LAKE, NY — What better way to spend a sunny Sunday afternoon, along with more than 1,000 motorsports fans, than watching cars crash into each other until one driver crawls out of a …

RR photos by Ted Waddell
Dressed for success. The first-place trophy in the bone stock V8 class went to Jereme Spanburgh, of Scranton, PA, who engaged in an epic battle with the driver of demo car #17 that, along with his car, was a testament to the strength of American steel. Asked about his red tie, Spanburgh said he always tries to look his best at demolition derbies.

RR photos by Ted Waddell
Well, I did it, dude. Jereme Spanburgh of Scranton talks to the spectators during a post-race interview with Andy Crane, the track’s co-announcer, promoter and race car driver.
RR photos by Ted Waddell
Top dog meets Mad Dog. Gary Cooper, left, first-place finisher in the compact trucks division, lines up at the trophy table with Jesse Largess, of Middleburg, PA, who took the second-place award, along with the Mad Dog banner as the event’s most aggressive driver in his van “Trump Train.”

RR photos by Ted Waddell
Hey, my raffle car doesn’t have a radio. John Griffith Jr., of Honesdale, PA, was the lucky winner of the demo derby’s raffle car, a 2000 Toyota Camry. According to the event’s promoter’s, the warranty had expired.
RR photos by Ted Waddell
Last man standing. Tommy Goodspeed, winner of the bone stock compact division, was walking proud after the contest.
Posted Wednesday, October 14, 2020 9:43 am
By TED WADDELL

KAUNEONGA LAKE, NY — What better way to spend a sunny Sunday afternoon, along with more than 1,000 motorsports fans, than watching cars crash into each other until one driver crawls out of a smoking wreck to be declared the winner in a demolition derby.

Well, maybe put a metal bucket on your head and have a guy named Bubba, a big ugly dude with a really bad attitude, beat on it with a stick.

Maybe not today—thanks but no thanks—but you get the idea. 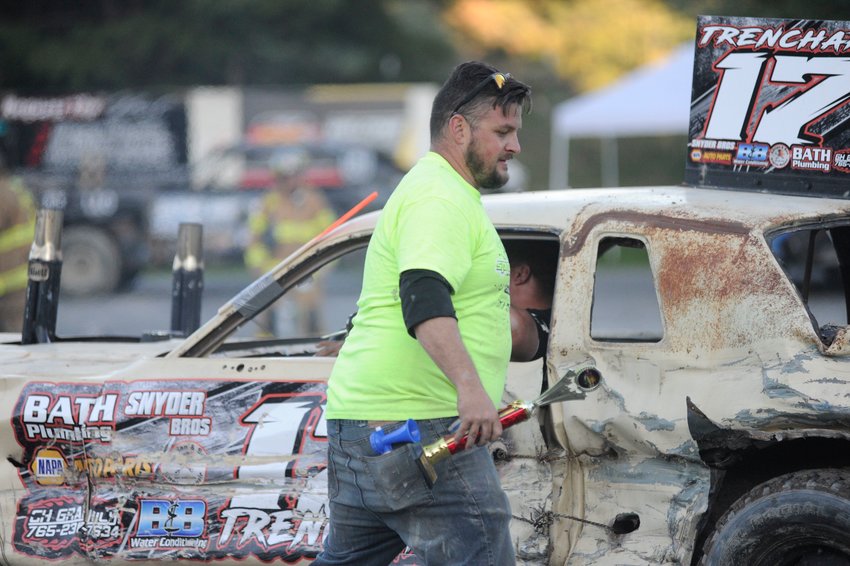 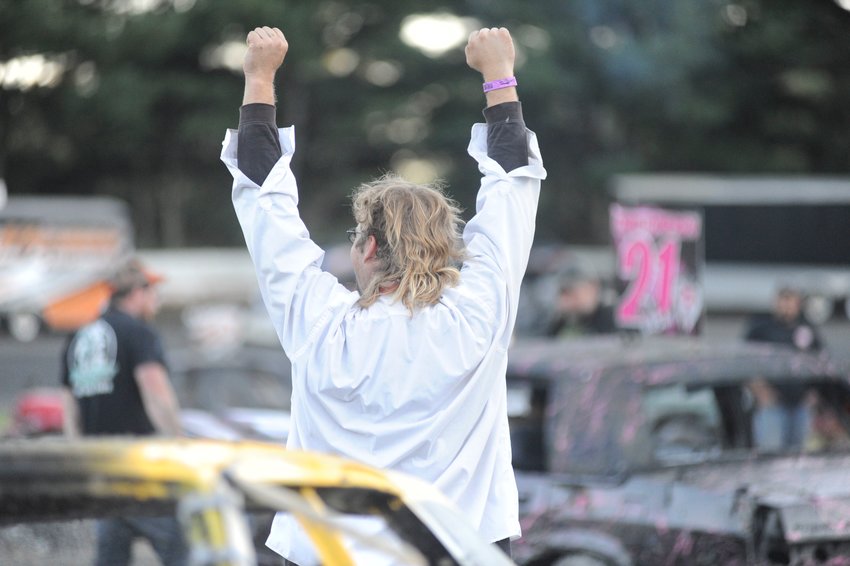 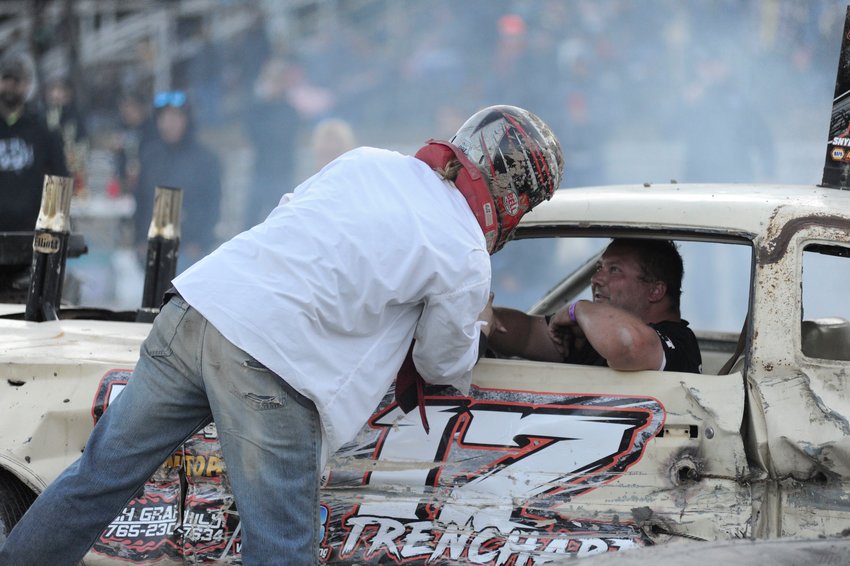 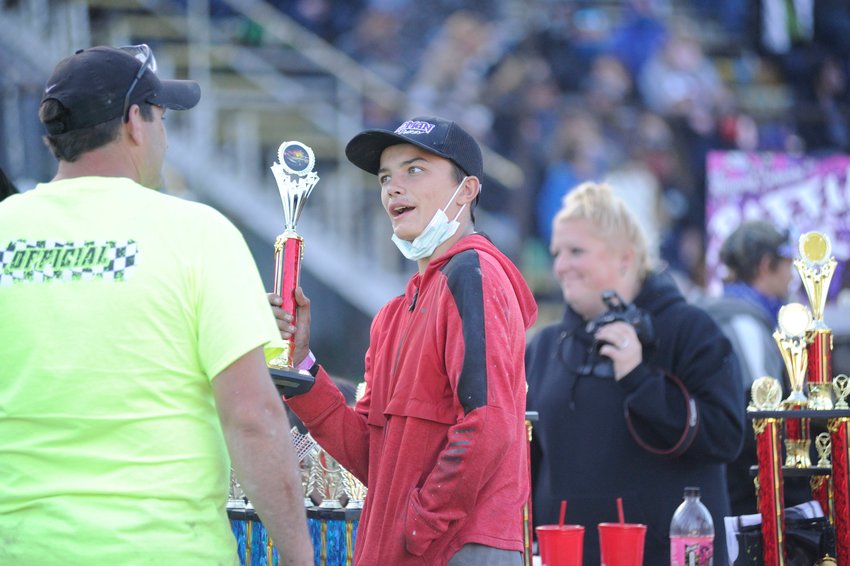 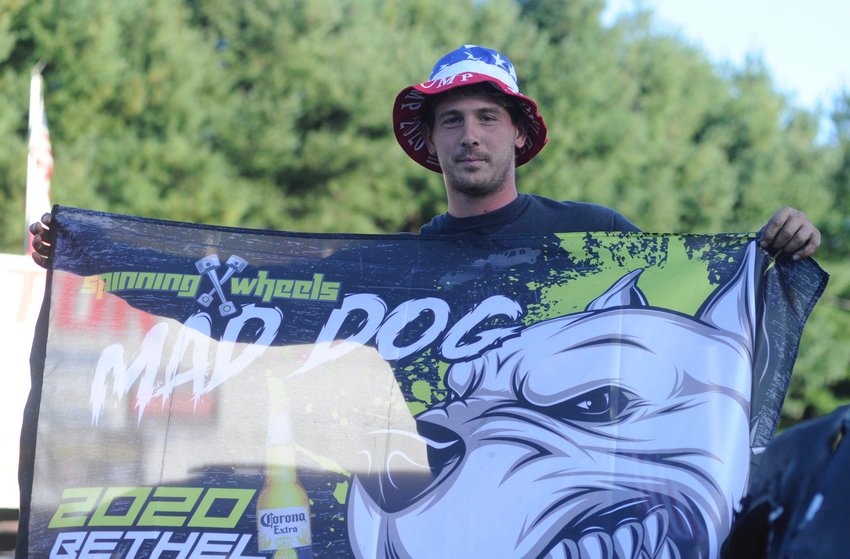 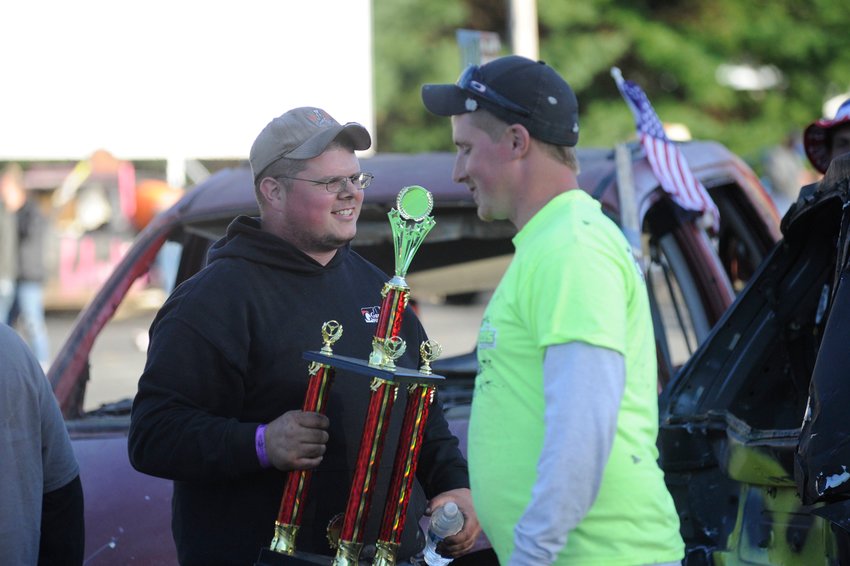 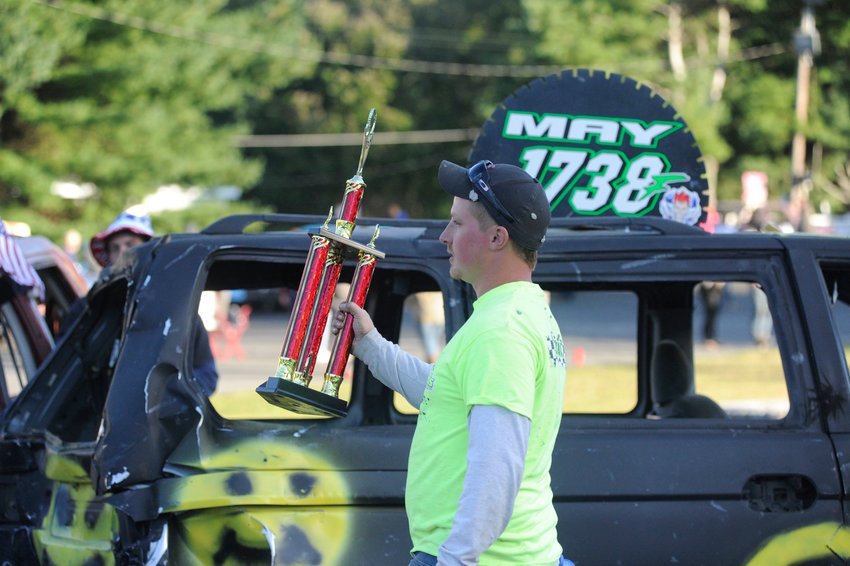 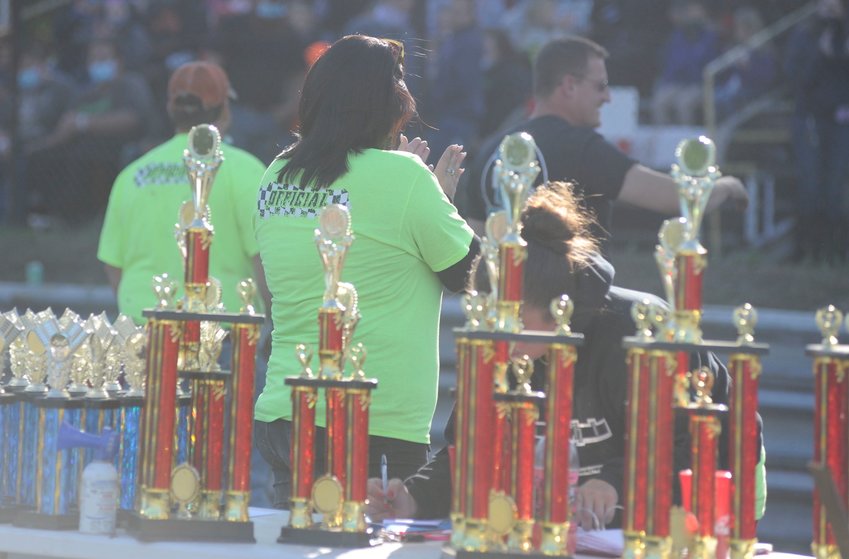 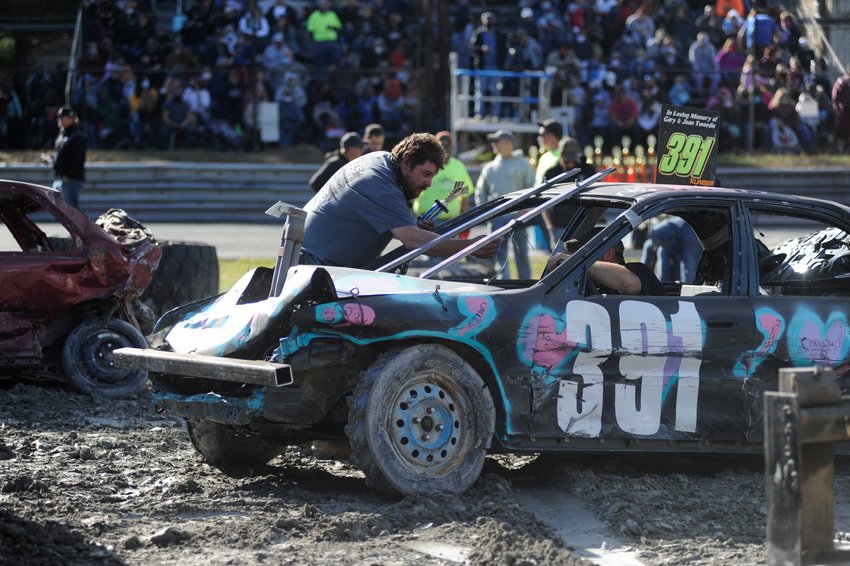 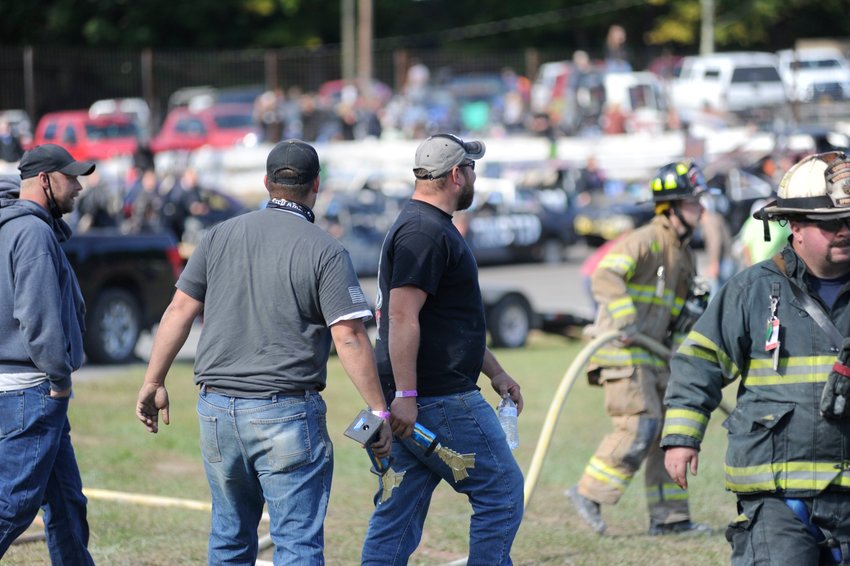 Other than the glittering trophies, the most coveted and hard-earned award was the Mad Dog banner. This is given to the driver in each division who, in the opinion of the officials, was voted the most aggressive driver on the muddy course—that guy or gal who reduced the opposition’s ride in a pile of smoldering junk.

The centerfield of the quarter-mile oval was converted into a demo derby arena, which was filled in by slippery clay and ringed by giant tires to contain the vehicles as they spun into each other.

To keep things safe and spray water on the course, a trio of local volunteer fire departments were called into action: Kauneonga Lake, White Lake and White Sulphur Springs.

Shouts of “Smash ‘Em Up 2020!” filled the stands, and the spectators got a visual thrill ride as the drivers went full-bore at each other, intent on reducing their opponents’ vehicles to twisted steel, bearing monikers such as “Devil Child,” “Trump Train 2020,” Bad Boyz Motorsports,” “Stalker,” “Hillbilly Hammer” and “High Octane” just to name a few of the more colorful handles.

According to Josh Decker, one of the organizers of Spinning Wheels Productions, LLC, in the past five years, “We have become the largest demolition derby promoter in the Northeast... We smashed 1,100 cars last year and gave away $80,000.

“We also put on the largest charity demolition derby in the country to raise money for terminally ill kids with Sanfilippo Syndrome.”

Andy Crane, the oval tack’s co-announcer, promotor and driver of car #4, summed up the “Smash ‘Em Up!” demo derby.

“It was a fantastic event. We had well over a thousand attendees in the stands, and a few hundred more in the pit area… it was a home run.”

To learn more about or contact Spinning Wheels Productions, visit www.spinning
wheelsproductions.com, and to keep up-to-date on the events at Bethel Motor Speedway, visit www.bethelmotorspeedway.com, or check out their active Facebook postings.

In upcoming editions of the River Reporter, we will focus on other stories from the demo derby: “Faces in the Crowd,” “Twisted Metal” and a pictorial tribute to the local volunteer firefighters.

The ‘Mighty M’: Behind the scenes